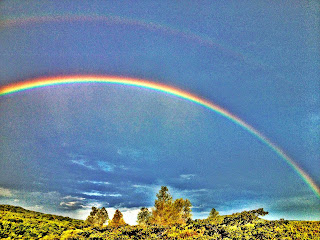 Leaving Fayetteville yesterday morning, a cloud burst over me. The rain pelted down hard enough to wash the sticky tree sap and smeared travel bugs from my windshield. At the same time, the sun flooded in from the East. A sunshower. The devil was beating his wife. Who did the devil marry? I’m not sure I ever learned this in Sunday School.

Behind me, an amazing double rainbow. Beyond the interstate, in the lowest point of the valley, the rainbow seemed to end at an old white barn, the blurry colors filtered around the roof. I always knew barns were special. I wondered if there was a pot of gold inside?

For a split second I thought about chasing the rainbow, trying to drive down the mountainside. Instead, I veered off at the next exit to snap a quick picture. This slight break in the drive was enough to upset Lucy and Annabelle. They thought we were already back in Dallas. Even so, the disruption was worth the stop.

Back on the road toward Fort Smith, Annabelle was extremely restless, whining and trembling. At this rate, a long drive home. Clearly, she wanted to see that pot of gold.
I was still thinking about that rainbow, feeling a bit sad to leave Arkansas. Was it a sign we were driving in the wrong direction? No time to wallow in this nostalgia. The moment we drove into Oklahoma, Annabelle projectile vomited from her backseat crate onto my arm, the floor board and the bottom of her crate cushion. Linda-Blair-head-spinning-chunky-dog-puke.
Suddenly I found myself in Vian, Oklahoma, in an empty parking lot wedged between Big Pawn (We Buy Gold) and ShortStop (Home of the Bar-b–que Train). One ironic, both sketchy. Directly across the highway, the Vian High School Marching Wolverine Band held an early morning practice. With only about twenty-five band members, the music sounded surprisingly decent. I love a good marching band and easily recognized Proud Mary. Singing along I cleaned dog puke from every crease and crevice of myself and my car with a dry Wet One. Annabelle appeared tired and weak. Lucy was simply embarrassed. 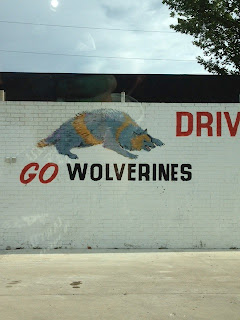 During this Oklahoma out-of-body experience, I realized…. I already have my pot of gold.

And I also thought…. I have no earthly idea what a Wolverine is.

Have You Ever Seen the Rain? – Creedence Clearwater Revival

The wolverine, pronounced /ˈwʊlvəriːn/, Gulo gulo (Gulo is Latin for “glutton”), also referred to as glutton, carcajou, skunk bear, or quickhatch, is the largest land-dwelling species of the family Mustelidae. (Wikipedia)
clear as mud….