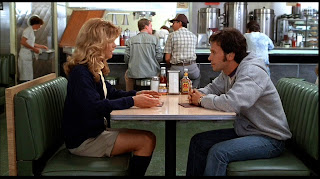 Can men and women just be friends? I say yes.

But, it seems that if a woman even glances at a man, he takes this as a sign. A sign of something more to come. AmIRight?
My friend and her husband went through the Starbuck’s drive-thru for coffee with their toddler in the backseat. She drove and placed the order, he sat in the passenger side. The young barista took the money, passed the drinks through the window, two minute transaction, that was it. As they drove off he declared all peacockish, “She was soooooo hitting on me!”

Oh really? I wonder if the barista realized this.
No words were exchanged. Maybe she was just doing her job? Smiling at the customers and making eye contact… Being friendly instead of grunting… Or, was the Starbucks chick truly sending him a vipe?  A bit of extra foam with his no whip macchiato? A little something-something for this clearly married man?

From the drive-thru window, I doubt she even saw him.

He LOVES to re-tell the story of the caregiver we hired a while back. “That woman tried to get me on the divan!” Divan? Who is he, Sir Lawrence Olivier?

His wife of 60+ years just smiles and looks at me knowingly. We shake our heads imperceptibly and share this MenAreCrazy bond.
Is this a Mars/Venus thing?
talya
You’re So Vain – Carly Simon

Sometimes I wonder if men and women really suit each other. Perhaps they should live next door and just visit now and then.
– Katherine Hepburn

You know how a woman gets a man excited? She shows up. That’s it. We’re guys, we’re easy.
– Harrison Ford in Six Days, Seven Nights