Here we are again. Sitting smack dab in the middle of another sweltering summer. Another obscenely hot and cruel summer. Motionless and glaring. Water droplets from sprinklers evaporate before touching the parched grass. Mother Nature sends no rain for the crops.  Evidently she holds a grudge. 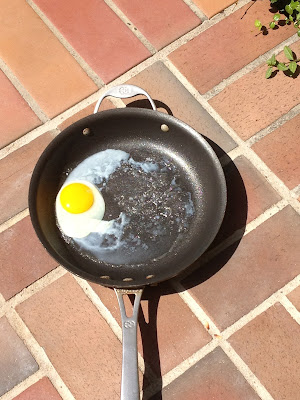 Yesterday I fried an egg in the backyard by the swimming pool. The pavement burned my feet and the skillet handle scalded my hand, as hot as the oven. The pool water is probably hot enough to poach an egg. Even the kitchen tap water is warm.

Every night the super enthusiastic weathermen of Dallas try to inject a new twist into the forecast. Something to justify their time slot before sports. Before the Olympic news and Dallas Cowboys training camp. But there is nothing new. There won’t be anything different until that first cold snap on Halloween, if we are lucky. The high’s and lo’s are fancifully displayed and the heat index is thrown in for effect as the entire Dallas-Ft. Worth Metroplex collectively gasps. As if there is a distinct difference between 110 and 112.
No matter how high the mercury soars each day this summer, the record high temperatures hold firmly in place. From 1980. Nothing compares to the summer of 1980. The summer I graduated from Rivercrest High School. The summer we did rain dances in the front yard in air that cloaked our bodies like gauze.  The summer daddy had a scorched crop yet forked over college tuition. The summer we nearly had to bury him on the banks of Little River.


In 1980, thousands of lives were lost and crop damage totaled in the billions. Beer sales in Texas were at an all time high.
Thank goodness we irrigate the crops now.
Only 51 days until Autumn….

“The first week of August hangs at the very top of the summer, the top of the live-long year, like the highest seat of a Ferris wheel when it pauses in its turning.” Natalie Babbitt, Tuck Everlasting.