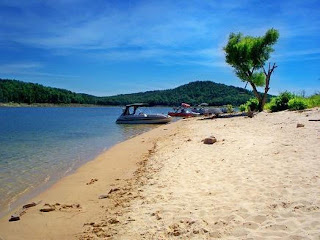 Kelsey and I set out on the jet ski to buy beer, headed for Tracey Marina. I thought I knew how to get to Tracey Marina from the Sandy Island… turns out not.
Everyone else stayed on the island and prepared for our annual gritty hot dog roast.
The water was RoUgHeR than I expected. Hanging on for dear life with every muscle strained in a full core death grip around Kelsey, she flew full throttle over the waves as I screamed like a little baby girl, my head tucked down buried in her life vest. With Kelsey laughing… laughing until the jet ski started shrilly beeping. Beeping LO FUEL LEVEL. Over and over. With Tracey Marina no where to be seen.
No gas, no sunscreen, no cell phone….
Concentrating on bracing and breathing while shrieking left little time to pay attention to the surrounding landmarks. Eventually from the back of the speeding bullet jet ski I looked up to see nothing familiar….Everything looked different. We may as well have been on Bull Shoals Lake…
** Beep*********** LO FUEL LEVEL **
We flagged down a slow pontoon with two men aboard.
Us: Where is the nearest marina? We are almost out of gas.
Two Men: Follow us, we are headed there. It’s around the corner.
Suddenly, everything came clearly into view and I spotted Robinson Point! While I was trying not to die, we had jetted all the way back to the main channel.
We followed the Two Pontoon Men who were going a leisurely 5 mph farmer pace. They chatted with each other. We broiled. Our jet ski continued to beep and screech periodically. Hopefully they would notice when we completely ran out of gas and fell over into the water…
They led us to Blue Heaven Resort where we had been yesterday on our ‘three hour tour’… Trolling around to the opposite side; however, was Buzzard’s Roost Marina, just where it was supposed to be. Just where it was yesterday. Just where it has been my entire life.
Turns out the Two Pontoon Men worked at Buzzard’s Roost. But unfortunately the gas pumps temporarily didn’t work. So we waited, along with a talkative David Allen Coe-looking customer, also on a jet ski. Our new friend.
We explained our situation to the Pontoon Driving Buzzard’s Roost Man while waiting for gas…
Me: We were trying to find Tracey Marina to buy beer.
Buzzard Man: You are a long way from there.
Me: Yeah. We came here yesterday but thought it was Blue Heaven Resort.
Buzzard Man: Blue Heaven is the private dock over there (pointing). This part is still Buzzard’s Roost.
David Allen Coe Man: You have to be lost to even find this place.
Me: I totally agree! (bonding with Mr. Coe)
Buzzard Man: Pumps are working, you want it filled up?
Me: How much will it cost to fill this up?
Buzzard Man: Probably about $50.
Me: I only have $40. Don’t go a penny over $40 or I’ll have to come back tomorrow to pay.
Buzzard Man: Yeah, like you could find us again.
Me: That’s just rude.
Buzzard Man: But true. (laughing…) What about your beer?
Me: Yeah I need one. But I need gas worse.
FINALLY, we made it back to the Sandy Island with no problems – perfect navigation on my part. ThankYouVeryMuch. No sight of Tracey Marina. Hot dogs had been eaten, smores eaten, everyone ready to pack up and leave the Sandy Island.
Everyone: Where have you been?
Me: Buzzard’s Roost.
Everyone: (Perplexed faces…)
Kelsey: We had another adventure.
Momma: You know I just remembered we could have bought beer right around that corner. Pointing….
talya
Musical Pairings:
Knee Deep, Zac Brown Band
“When you lose yourself, you find a piece of Paradise.” Knee Deep – Zac Brown Band 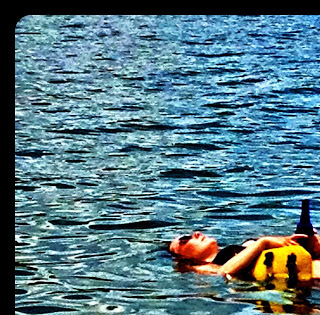