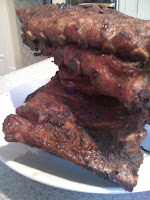 The guys smoked a mountain of food – ribs, sausage, fajitas, chicken – enough for the entire neighborhood. The girls brought sides – slaw, beans, salad, sweet potato fries, guacamole, rice, sautéed onions – enough for the mountain of food. Everyone brought wine – enough for the city. Red,white,Zin,California,Italian. Great night, minimal mosquitoes, clear skies, 4 couples.
1 Arkansas Razorback
1 Baylor Bear
1 Notre Dame Fighing Irish
1 Navy (goat?)
1 Oklahoma Sooner
3 Texas A&M Aggies
How many Aggies does it take to make a great party??
Nellson & Melissa (Aggies) brought their friends Aaron (Navy) & Amy (Aggie) to this dinner. Amy was Melissa’s college roomie and we had never met before this night. Young, gorgeous, blonde couple, Barbie+Ken. Right off I wanted to hate them but couldn’t. Amy was adorable, about 5 months pregnant with their first child and glowing. She gushed over the food and the house and Aaron doted over her. They were sweet.
I quickly discovered she was a dentist. This was shaping up to be a very productive evening. My current dentist is a creeper and his office staff wears me out with constant cross-selling. Would you like to brighten your teeth with that root canal? Would you like to go ahead and replace every single filling in your head just for fun? Amy told me I have beautiful teeth and her staff is low key. Melissa backed her up. As a bonus, her office is more geographically desirable than Pee Wee’s location. I was sold. Sign me up! Here is my insurance card. Could you just clean my teeth in the kitchen after dessert? I found a new dentist!
It’s amazing how things work out. 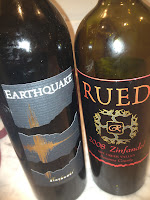 The wine flowed, but of course Amy could not partake. Regis brought a wine named Rued (pronounced Rude) and another named Earthquake. These names brought lots of silly jokes and laughs. People are very funny on wine.
At these neighborhood gatherings, the conversation always turns to college football, no matter the season. Always. There is an ongoing rivalry between John and Nellson, between the Hog and Aggie. For several years a bet is made before the annual game. There is ribbing and joking and hog calling and weird aggie chanting on our block leading up to that exciting perfect fall day. And each year since the bet has been extended, Nellson is the L-O-S-E-R. His punishment – wearing the Hog Hat to a neighborhood event all night. Instead of ever making good on the bet, John and Nellson prefer to ‘double down’. So now Nellson owes several days of hog hat wearing…
He did dress as John for Halloween last year wearing the Hog Hat and Razorback attire. It didn’t count in my book. It was a costume, and he was having waaaaay too much fun. But he made such a cute Hog.
As we discussed the upcoming game in College Station, Nellson remembered last year they were returning from Europe during the afternoon of the game, so they recorded it to enjoy later. His remark reminded me of a Facebook comment I posted to Melissa immediately after the game, not realizing they were recording it – something about Nellson ‘getting’ to wear the hog hat yet another time. Instantly one of her friends responded to my post – THE BURNSES ARE RETURNING FROM EUROPE AND HAVE NOT SEEN THE GAME. DON’T RUIN IT FOR THEM!!!! Wow. Impressive but rude. Melissa and Nellson had their own freakin Facebook police chick??! I quickly took down my post, being neighborly and all, but I was still bitter well into college baseball finals.
As I resentfully recounted this still fresh memory, Melissa’s eyes grew large as she swatted Amy’s leg underneath the table. Amy, sober and probably sleepy by this point said, “Who was it? Who would do that?”
“It was YOU!” Melissa laughed and laughed as Amy looked mortified.
“YOU??! You were so RUDE!! You don’t seem that rude now!” I laughed and continued on with the story. Melissa pointed out that Amy was drinking back then….All the guys were laughing. Regis continued to pour Rued wine.
Amy was crawfishing and stammering…”You know it’s really hard to relay feelings on Facebook, that’s the problem with Facebook…”
“Oh I understood your feelings alright.” More laughing.
This went on and on. We moved from Rued wine to Earthquake. What were the odds this person would end up at our table? And that I would bring up this specific Facebook post written months ago? Soon I will be 50. I suppose I’ve entered into that period of my life where I am comfortable enough to say what I think. I admit it actually crossed my mind before I brought up the Facebook post, could Amy be the girl that posted that comment? And I thought, Nah, I doubt it. And then I thought, Who care’s?
The night ended well (I think) with no hard feelings and a big howl for everyone. I hope we will see them again, but I don’t know if I will feel comfortable enough to ever sit in her dental chair…
Not with all those pointy instruments…
talya
Musical Pairings:
Mean Girls, Sugarland

“Be who you are and say what you feel because those who mind don’t matter and those who matter don’t mind.” Dr. Seuss 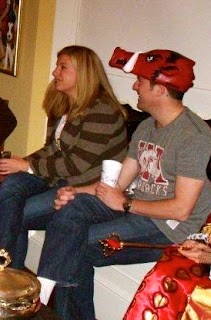