July is National Hitchhiker’s Month. When was the last time you saw a hitchhiker? Like pay phones, they are no longer commonplace. As kids, we always saw hitchhikers as we drove to Memphis looking for Elvis. We pointed them out like VW Beetles. Although we are not yet zipping around in personal bubble-lidded aerocars like the uber-cool Jetsons, travel is more accessible today, even for the man with no wheels.  Have hitchhikers somehow become charmingly vintage? Is it really necessary to draw attention to thumbing rides by dedicating an entire month? A broiling hot month?
I would never ever pick up a hitchhiker, especially after Pee Wee Herman hitched a ride to San Antonio with Large Marge. As frightening as Pee Wee was, the thought of Large Marge still makes me shudder. “On this very night, ten years ago, along this very stretch of road in a dense fog just like this…” I imagine she is behind the wheel of every eighteen wheeler I pass on the highway, especially in dense fog. 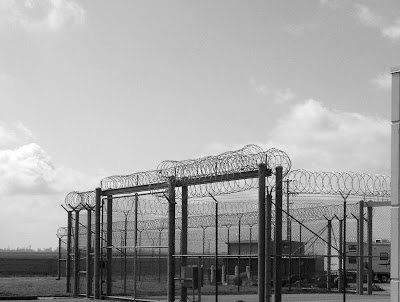 Driving through Oklahoma a few days ago I saw 4 separate hitchhikers (!) which was a bit unnerving considering the Department of Corrections is located in McAlester. The ominous sign on the highway warns, “Hitchhikers May be Escaped Prisoners.” This begs the question – just how often do these prisoners break out of this huge correctional fortress surrounded by tons of reinforced loopy nasty barbed wire? It obviously happens on occasion to warrant such a roadside warning. Government signs are only made after the fact, after a loss, after a lawsuit, after an escape. A reaction. I don’t stop to go to the bathroom around there. Oklahoma doesn’t seem OK to me.
I bet no one celebrates National Hitchhiker’s Month in Oklahoma.
Daddy always reminded us we would be murdered if we stopped at a rest area driving from Baylor to Osceola. This was his regular advice offered each spring break and Christmas holiday season. Never did he say, “don’t speed” or “study hard” or “buy low sell high, but always “don’t get murdered at a rest stop”. I considered his rest stop advice to be ridiculous until I learned of Large Marge. There are lots of big trucks at those places with motors eerily idling. 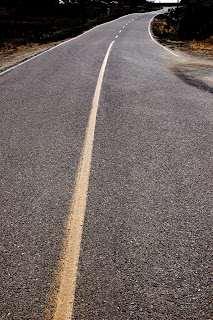 Tomorrow I will be starting my big adventure driving from Dallas to Piggott – 10 hours – alone. I plan to leave super early, listen to a book on tape, avoid hitchhikers and murderers, and only use the bathroom at well lit McDonalds. I hope there is no fog.
talya
Musical Pairings:
The Champs, “Tequila”