In the back of my mind a story percolates. This tale is old, told at a family reunion by my cousins, RM and Bud Johnson, natural storytellers. Stringing words together they can spin a yarn, entertaining a crowd for hours, silencing a group of Johnson cousins who cling to each word. And Johnsons are rarely a quiet bunch.
Johnson boys are/were blessed with the story-teller gene, passed-down from Grandpa Johnson who inherited this talent from his father who fought for the Confederacy at age 13. I bet he had some stories…
Each time I spread out paperwork, family notes, research, pictures, and begin to write a few sentences, something happens to distract me, an act of God or a near neighborhood shootout – a typical Dallas day.
The first interruption – an incredible hail storm that pounded our house and car, taking me away from this story for the rest of the night. The next afternoon at nearly the same time, the next-door neighbor’s house alarm interrupted the stillness like a tornado siren. Initially, I ignored it, engrossed in 1920 with the Johnson ancestors. But I remembered my neighbors were out of town. It probably wasn’t a false alarm. And it was LOUD.
Trained in the 1970s by Nancy Drew, I abandoned my story and chose to investigate. Circling the house, I studied the front porch for unusual activity and walked up the side drive around to the backyard. I scanned for anything atypical, but only a day after the hellacious hail storm, nothing really seemed normal. The alarm continued to trumpet as Lucy and Annabelle howled next door. The gate leading to the alley was wide open – muddy footprints? A clue. And, there was an open window in back of the house – completely open while the air conditioning ran. Another clue. Peeping inside I felt the cold air rushing out from the kitchen, mixing with the hot muggy backyard air. I considered calling out to the intruder hidden inside, to let him know I was onto him, hot on his trail. What would Nancy do? 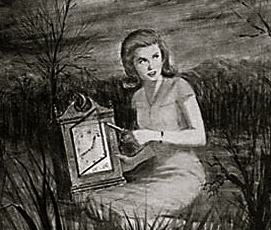 Nancy Drew, wearing a smart cardigan with matching pocketbook, solved secrets of the old clock and clues in the hidden staircase, NOT the mystery of the murderous meth heads…. So I did what any modern-day sleuth would do, I dailed 911. I called for backup.

Six police officers surrounded the house with guns drawn. A very young officer with Hardy Boy-ish good looks immediately took over my case, directing me to step away from the property ma’am, clearly unaware of the summer hours I spent training in River Heights as a teenager. After nearly an hour, Joe Hardy reported the thief had fled, likely due to the alarm noise or perhaps my skillful detective work. Regardless, another night was spent not writing the story I intended to write.
So here I sit again, staring at a photo of Roswell Mallory Johnson, ready to work on this story. If there is an earthquake or a plague of locusts sent to disrupt me, I will take it as a sign from above, a message that I don’t quite have the facts of this particular Johnson story right, that I’m heading down the wrong path. But maybe those Johnsons could at least give me a chance to finish a first draft…
talya
Musical Pairings:
In Color, Jamey Johnson