Some endangered species should just be allowed to disappear. Perhaps we intervene too often, disrupting the natural order and balance of the universe. For example, I came across a plea to save the Alpine Wooly Rat. Honestly, I hope to never cross his path. Or the Purcell Hunter Slug threatened by loss of habitat. If one moves into my garden by some strange happenstance, he will dissolve in a dusting of Sluggo as fast as the bucket of water melted the Wicked Witch of the West.

Thank goodness the dinosaurs died out. We think traffic is bad now. If you recall, Jurassic Park didn’t end well.

I’m skeptical of the butterfly effect. I know things are somewhat interrelated and devastation of one species can result in utter chaos, but is the graceful flutter of the orange dragonfly hovering over our swimming pool truly responsible for  tropical storm Debby currently stirring up the Gulf of Mexico? The dragonfly does reappear each spring right at the onset of hurricane season… Fluke? Fate? Although there are several dragonfly species on the extinct list, they are alive and thriving in our back yard. 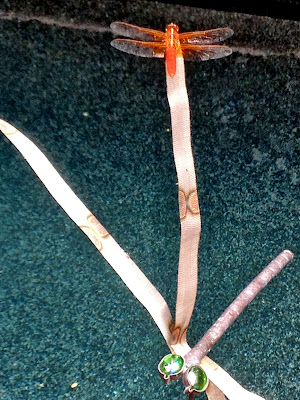 Maybe some things should be allowed to naturally die or change or expire or evolve. Extraordinary measures should not become commonplace. No one is responsible. Everyone is responsible. We need protection from ourselves. We should just let things be.

I vote we concentrate all our ecological tree hugging money and efforts on saving whichever species eat mosquitoes.

The blood suckers are well represented this year.

Let it Be, The Beatles

Oooh, so Mother Nature needs a favor?! Well maybe she should have thought of that when she was besetting us with droughts and floods and poison monkeys! Nature started the fight for survival, and now she wants to quit because she’s losing. Well I say ‘hard cheese.’ – Mr. Burns, The Simpsons