Do you ever see something totally out of place and wonder what the heck happened? How did it get there? Why is that object in the tree? I just craft a plausible explanation in my mind so I can move forward with my day. 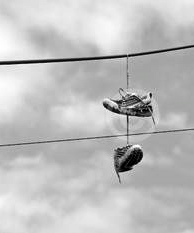 What about shoes hanging from power lines? I see them everywhere and always wonder the significance. Is it some type of gang symbol? The mark of a crack house? Bully behavior? Or is shoe flinging just an odd sport like midget tossing? Some of those shoes look new and nice and EXPENSIVE!
On Mother’s Day I saw a beautiful long-stemmed red rose lying on the street in front of a driveway in my neighborhood beside an empty bottle of motor oil. Mother’s Day gone bad?
Yesterday I saw a Little Mermaid paper plate with a half eaten piece of white cake lying in the street at Worth and Fitzhugh. Birthday party gone bad? 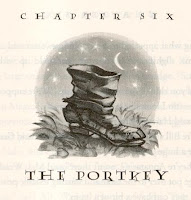 Of course most things I attribute to litter bugs, but the most random objects I realize are portkeys. For all you uninformed Muggles who have somehow been living totally in the dark for the past thirteen years, portkeys are everyday objects enchanted so those touching it will be transported to another place. The magical world uses common objects to avoid the attention of non-magical people (us). The portkey used by Harry, Hermoine and the Weasleys to travel to the Quidditch World Cup was an old boot. I see those all the time on Gaston Avenue.


Ever wake up after over-indulging at George’s and not remember how you got wherever you are? Maybe that Big O at Georges was really a portkey? That could be your story anyway.
In our hood, even with all the crazy daily occurrences, people carry disposable bags and pick up after their dogs. It’s the neighborly, environmentally friendly thing to do. I scoop a lot of poop. A few weeks ago I attempted to toss a used bag into a garbage bin behind one of the apartments. Throwing with my left arm while attempting to restrain two ill-behaved schnauzers, my wild pitch ended up dangling from an overhanging tree limb. I couldn’t reach it. It was there for days, like one of those random things you see and wonder about. Finally, with a broken tree branch I managed to snag it yesterday and properly dispose of it before someone mistook it for a portkey.
Today I’m heading back to Fayetteville. I wish I could travel by a charmed portkey. It would be so quick and convenient, especially since Muggles aren’t yet allowed on the floo network.

“And remember, a portkey can be a seemingly harmless object, like… a football, or… a dolphin.” Professor Snape