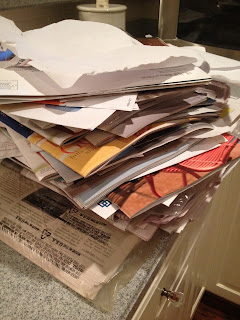 I’m thinking of wallpapering our new Fayetteville bedroom in Pottery Barn/Williams Sonoma catalog pages. Or maybe using it to wrap presents for the remainder of my gift giving days. Or I’m certain I could make a door wreath from the glossy pages of J Crew catalogs and post the crafty picture to Pinterest.

When was the last time I ordered or purchased anything from Pottery Barn? I have no recollection. Nevertheless, I receive  Pottery Barn, Pottery Barn Teen, Pottery Barn Bed & Bath, and Pottery Barn Baby every single week. I ordered a quilt from Pottery Barn Teen when Tate was 10. Nine years ago. So in the company’s fancy computer tracking systems, why don’t they make note of this purchase? Seems logical that whoever was using that quilt with bright blue stars in 1992 has probably moved on to a different style. That little boy has one year of college under his belt and buys only gray bedding and clothing. And it goes without saying, if the household has a dorm dweller, there probably aren’t any babies at home to buy from Pottery Barn Baby. What a waste of trees.
Of course many teenagers have babies so maybe people go from buying teenage room accessories to bumper pads for the grandbaby cribs without a beat. But wouldn’t it be more prudent to wait until someone actually buys something or at least visits the baby website before spending all that company money to print and mail out senseless catalogs all over the country daily? I bet most teenage parents can’t afford Pottery Barn…
I am going to spend time someday somehow getting myself off these lists. So far the catalogs haven’t followed us to our new address in Arkansas.
These catalogs do provide entertainment for Lucy and Annabelle who wait for the mailman, snatch the catalogs from the mail slot and shred them as fast as possible. I take these shredded catalogs, as well as the unshredded ones, and immediately drop them into the recycle bin where I suppose they are recycled into more Pottery Barn catalogs.
We recently received a Restoration Hardware Catalog larger than the old Sears Christmas Catalog we received as a kid.  Remember when the only catalog was from Sears? We couldn’t wait for that catalog – the official countdown to the Christmas season! Staci and I studied it for weeks, memorizing the toy section, circling our favorite items. Afterwards we used it to cut out paper dolls. This was recycling at its best. Restoration Hardware doesn’t even have any people in it.
One day last year the postman delivered a whole stack of books to our house. Hardback novels. They were wrapped in cardboard and stacked on the front porch addressed to Sam Smith. We do not know a Sam Smith, nor did a Sam Smith ever live here. But apparently he joined a book of the month club for our house.
I loaded up the books and took them to my neighborhood post office where I waited in line forever to complete an official form for a postal investigation with the U.S. Postal Inspector. The postal worker thought Sam Smith was the victim of possible mail fraud. Someone had enrolled an unsuspecting Sam Smith in a book club, gardening club, knife club, etc. all at a bogus address – ours. If we didn’t return everything – if we simply threw away all the notifications and bills that would follow, the company would be out money/books and Sam Smith’s credit would be harmed. What about us??? Our porch was being bombed every afternoon with towers of books that I was expected to haul down to the post office on my lunch break. I was having flashbacks of my Columbia House membership in 1975 – 25 eight-track tapes for one penny….Columbia House thankfully lost track of me in Waco.


It became immediately apparent the postal lady left her sense of humor at home and was sucking all the fun from the immediate postal area.
Me: Sam Smith is already getting bills for this stuff.
Sourpuss: How do you know?
Me: Because I opened some of the letters to see what they were.
Sourpuss: Opening someone else’s mail is illegal. You cannot do that. Blah Blah. Stink eye…
Me: So stop bringing me someone else’s mail! Return stink eye…
So now I’m guilty of mail fraud and this exchange has likely been recorded in my permanent file.

We still get tons of mail for Sam Smith which I mark “Return to Sender” each time. We also receive mail for the Hultses who lived here 10 years ago, my first ex-husband, John’s first-ex-wife, and Kelsey’s first ex-boyfriend who wrote down his name and our address at a college fair in 2006. How on earth will the government shut down some of the post offices? Who will shuffle around junk mail door to door? Is the government creating this junk mail to keep the post office entitlement program alive?
After ten days in Fayetteville, we returned to a two foot stack of mail. Mostly catalogs. Some duplicate catalogs sent to me, John and Kelsey. Tate received mail from Oaklawn Park. My first ex-husband received his AARP card – and so did John. Sam Smith received mail too.  I promptly returned it to Publisher’s Clearinghouse.