John gave me a cold recently. It started with a sore throat Monday night during House, moved into a hacking cough on Tuesday by Good Morning America, and morphed into a full-fledged head cold by Modern Family complete with stuffy sinuses, pounding headache, and watery eyes. I hate being sick. Every day a new symptom showed up and every night John feigned total shock, “You should be feeling MUCH better today.” But each day I felt worse. Maybe it took me longer to get over it, because I get NO SLEEP. Combining his melodic snoring to my headache, sinus pressure, and teeth grinding, and it was the perfect storm for prolonged illness. 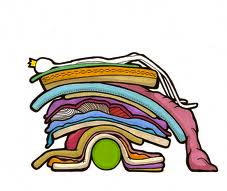 We have a new heavenly California king bed, which became extremely necessary when Annabelle joined the harem. The bed is hand crafted with “the finest pure flax, wool, cotton, carefully selected pine and genuine, hypoallergenic horsehair”. No kidding. It’s like sleeping on a cloud. The Queen of England sleeps on this same type bed. Since we spend 1/3 of our lives sleeping – or so the stat claims – we decided it was a good investment. The dogs LOVE it – it’s the horsehair, no doubt. John snores really comfortably on it. I’m pretty sure when our specific bed was handcrafted, an amusing master artisan weaved a pea into one of those many layers on my side. Not that I’m a princess or anything. I just can’t seem to sleep in these premenopausal days.
The week of my illness, I roamed all over the house seeking rest. Tate’s bedroom, the couch, Kelsey’s bedroom… Finally, one night, I broke down and whipped up a Whitneyish cocktail of Nyquil, cough medicine and Advil PM. I drifted off in the new bed and slept soundly. It was a deep, soundless, restful sleep with no interruptions. Apparently I passed out. The best sleep I remembered in a great while, and it was much needed.
Then just before daybreak, I had one of those wonderful dreams – the kind from which you never want to awaken. You semi-realize you are dreaming, but you continue on with the dream, floating, luxuriating in it, wanting it to be real. I was lying on the dock at the lake looking up at the early morning sky. I could feel the hard boards underneath my back. There was a slight rocking motion as the water slowly moved. The dock creaked. I love that sound – unmistakeable, tranquil lake music. My arms were chilled in the morning air, and there was a slight mist on the surface of the glassy water – a bit of fog. With shades of lavender overhead, I kept my eyes closed and listed to the rhythmic creaking. In the trees, a mourning dove called out. An early morning boater sped by in the distance rocking the dock with more intention. As kids, my sister and I loved to swim out with our floats to catch the bigger waves. The adults, naturally, never wanted any wake around the dock. The rocking picked up, but was still calming. I came to that point in my dream, when I was more awake than asleep. I didn’t want it to end, it was so pleasant. I wanted the motion of the dock to lull me back to sleep. Just keep sleeping.


As the fog continued to clear on the lake and in my head, the rocking became even more prominent. Wait, was I on choppy seas? The ocean? What happened to the lake? It wasn’t quite so peaceful anymore – rough waters. Suddenly, I was completely coherent and no longer at the lake.
The rhythmic rocking of the dock was actually snoring. At 5:30 am, John was glued to me in spoon like fashion, with his nose in my eardrum. Didn’t matter that I was ill, that I had a quarter inch coating of green Nyqil on my nasty tongue. Didn’t matter that I was wearing my “Fleas Navidad” t-shirt (thank you Renee). My nose was stopped up like a dirty sink and my hair looked like a bad version of the Farrah Fawcett ‘do. Didn’t matter. Apparently in that particular moment of time, when I was finally sleeping comfortably through an entire night, I was totally irresistible. And his loud snoring vibrations nearly rocked me clear off the dock/bed, of which I was allotted a teeny tiny fraction.
The lake and the dock and the mourning dove abruptly vanished, and my mind cleared. I elbowed John in an attempt to stifle the snoring. He rolled over, with a huge smile on his face, but still sound asleep. Hmmmm? While I was slumbering peacefully at the lake, I wonder just exactly what John was dreaming? Sometimes its best to not ask questions.