Once upon a time not so very long ago, there was a mystical headless horseman who silently rode along the banks of Little River at dusk. Sitting atop an enormous horse, he wore a flowing cape that trailed behind him. He could most certainly be seen when there was a fog or mist rolling in. And if that wasn’t eerie enough, a gigantic black snake slithered around within the overgrown brush on those banks as well.

A huge snake, bigger than the one at the Memphis Zoo, more like the ones in National Geographic that swallowed whole villages. We were very mindful playing around Little River, because that snake snacked on little girls just for fun. Thank goodness Uncle Woody kept a vigilant eye on these dangers. He was a Navy man, trained for menacing assignments around U.S. waterways. And he always reminded us of these creatures that lived only a few cartwheels from the back door, especially at bedtime. We often spent the night with our cousin Lesa.

As masterful as Uncle Woody was at weaving together a hypnotic tale, Aunt Lavern was just as skillful whipping up a luscious banana pudding or chicken pot pie in the kitchen. Both could make your heart skip a beat. Who wouldn’t want to fritter away time there? Snake or no snake.

We played on the Little River ditch banks, building forts and making trails. We stayed out there all day until supper time, coming home with sunburns and cockleburs. On Sunday afternoons, we often hid down inside the weeds around the water, watching a group being baptized in the muddy water. One by one these sinners waded into the mucky water. No way would I go in there! Plus, did these folks not know about the SNAKE?  This was Little River for heaven’s sake, not the River Jordan! This was not the way we did it at Brinkley Chapel just down the road.

We sat and watched, silently mesmerized. These people seemed to speak a completely different language. Were they speaking in tongues? We read about that in Sunday School, but we didn’t partake at our church. Maybe we should – it would certainly shake things up a bit. In fact, maybe these people were snake handlers… Hmmmm. That would explain a lot. Sometimes we accidentally giggled and rustled the underbrush. I’m sure they spied us in the tall grass, and said a prayer for the little heathen barefoot girls with cherry Kool-aid mustaches. Aunt Lavern would eventually discover us over by the bridge and shoo us into some more appropriate activity, leaving these people to their sin washing in peace.

The Johnson family has always gathered at Little River for reunions. Cousins and babies and aunts and uncles make their way back to that little spot between Athelstan and Carroll’s Corner to visit and eat and laugh and hug and sing and talkandtalkandtalkandtalk. The Johnsons are a talking, eating, hugging, singing bunch of people. They drive in from Missouri and Texas and Louisiana and just down the road. Uncle Woody died years ago and sadly, Aunt Lavern passed away recently. Will this tradition change? I know she would still want everyone to gather at the river. At her house. Just watch for the headless horseman. And the black snake.

Aunt Lavern’s Chicken Pot Pie
1 can cream of potato soup
1 can cream of chicken soup
1 can of veg-all (mixed veggies) drained – about 16 oz
1/4 c milk
Thyme, salt, pepper to taste (or whatever seasoning you like)
3 cooked and chopped chicken breasts (or leftover turkey)
One package Pillsbury pie crust (2 crusts to a pkg folded) or homemade pie crusts 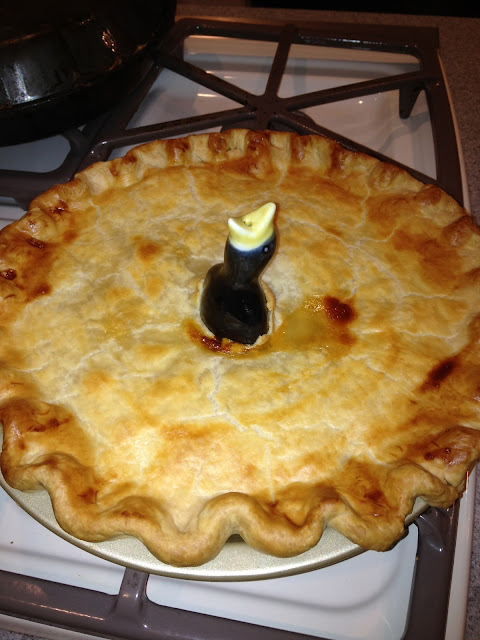 Mix all ingredients and pour into one crust. Fold other crust on top. Vent top with a few knife cuts or use a pie bird. Bake at 350 degrees for approx 1 hour 15 min until brown and bubbly.

Note: I always make this with leftover turkey after Thanksgiving. The turkey is well seasoned already which makes the pot pie flavorful. Also, I usually have leftover roasted veggies of some sort to use instead of Veg-All. Carrots, parsnips, potatoes, anything will work well. I prefer to buy the creamy potato/leek soup at Whole Foods, but any “cream of” soup…. celery, mushroom, etc, will work. And to save time you can use one of those roasted chickens from the grocery store (if it isn’t Thanksgiving). This freezes well. I usually make 2 and freeze one. Also, you can leave out the meat and add additional veggies for a vegetarian pot pie.


Alison Krause, “Down to the River to Pray”

“The preacher says all my sins is warshed away, including that Piggly Wiggly I knocked over in Yazoo.” Oh Brother, Where Art Thou?