It’s not everyday you get to dine with a prisoner chain gang. Driving to Fayetteville Friday, we stopped for lunch in Eufaula, Oklahoma. According to Urbanspoon, our lunch choices included Ken’s Pizza, a sketchy mexican place and I Smell Bacon. Now, I know exactly what you’re thinking. “How, could you pass up I Smell Bacon?” There was much discussion and debate, but we ended up at Ken’s. John loved Ken’s as a kid, and according to the Eufaula foodies, it had the highest rating on Urbanspoon.

As you might expect, the pizza was cold and cardboardish and rice-cake-like. The salad bar – a nod to 1977 – contained a big center bowl of wilted iceberg lettuce surrounded by smaller bowls of fixins such as cheddar cheese, fake bacon bits, purple onions, beets, tomatoes, broccoli and lots of mayonnaise-y salads like pasta, cole slaw, cottage cheese, and macaroni. And many of the veggies were pickled and vinegary, even the cucumbers which was a jolt to the taste buds. To accompany this, ranch, thousand island and bright glo in the dark orange French, which is what I selected. It was like walking through a worm hole into Ken’s in Osceola. I could see myself sitting in the big corner booth, wearing my cheerleader uniform, with Steve, Norma and Vic – after a high school football game.
It was 1:00 – apparently closer to siesta time than lunch time in Eufaula. Other than one lone Billy Ray Cyrus lookalike in the corner booth, we were the only patrons. The leftover pizza slices were sadly lying under those warming lights that are less effective than an Easy Bake Oven. Until the prisoners arrived. They had a reservation. 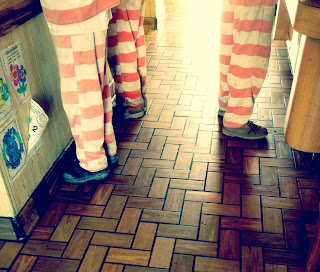 A large table was prepared in the center of the restaurant, with pitchers of iced tea and place settings complete with silverware (including knives) and napkins. Magically, fresh new hot pizza pies were pulled from the ovens, perfectly timed and placed on the buffet just as the Eufaula prison work crew walked inside wearing matching white and orange striped prisonwear. They were accompanied by the sheriff who provided no sense of security or peace of mind whatsoever. He was slow and stooped and was being trusted with two guns. OhGreat! No doubt, we would soon be involved in a Eufaula hostage situation. (My mother has a history with hostages – another story for another day…)

The pizza waitress became spirited and animated to see the prison work crew – flirting and talking and patting one guy on the shoulder. She probably went to prom with him? Or he was her cousin Bubba? They lined up, piled their plates with food, and then lunched at their reserved table laughing and talking and chowing down like they were VIPs in town scouting movie locations. Were these popular prisoners the Eufaula foodies who rated Ken’s so favorably on Urbanspoon? Luckily they were well behaved. And, thanks to the prisoners, we enjoyed a slice of hot fresh pizza before leaving.

Did the citizens of this county realize they were paying for the prisoners to eat Ken’s pizza during their litter lunch break? If I go to prison, I want to be on this chain gang. Fresh air and all you can eat pizza buffet.  Of course the horizontal stripes are a bit tough to pull off. 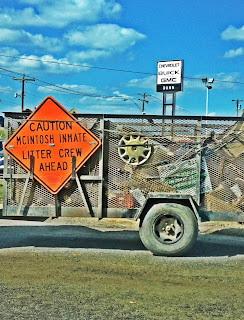