Santa knew I was a voracious reader. He fed my addiction, always bringing me a stack of books for Christmas which I devoured more quickly than the chocolate candy in my stocking. One year he gave me The Secret Garden by Frances Hodgson Burnett. It was magical and life-changing as I became completely lost within the pages, on the moors at Misselthwaite Manor. Mary Lennox and I were both ten years old, and I somehow related to her. Living in the country surrounded by bare winter fields could be a bit dull.

It was the first book I read that I simply could not put down. Although I wanted it to last forever, I quickly inhaled it. Wrapped in my blue and white polka dot sleeping bag and hidden underneath the dining room table, I found myself behind the stone garden wall, reading cover to cover one cold, Sunday afternoon, after church. It was a quiet spot to read as long as my little sister didn’t search for me. And it was cozy with the wall furnace nearby. Everyone needs a place to hide sometime. By the time the thistles turned to  roses at the end of the story, I was designing my own secret garden. Someday.

Forty years and hundreds of books later, The Secret Garden is still one of my top 10 books. It may even be in my top 5. I re-read it every few years and discover new things each time. And it continues to inspire me as John and I plant and trim and weed our tiny, postage stamp sized yard near downtown Dallas. It was a challenge from the beginning with no fence, bad dirt, a dying trash tree, and an oddly shaped deck. Slowly, we are transforming our bit of earth, hidden behind an iron fence and a few Japanese maple trees.

Along the way, we’ve discovered our garden has a few secrets of its own. Underneath the garage lies an old root cellar. It was filled in years ago, but we discovered its massive concrete doors during pool excavation.  UpCharge…. And each time we dig a hole to plant a flower, we find a brick. Through research we discovered several apartment units were built onto the back of the house for returning soldiers after WWII. After demolition, these bricks were buried over time. So far, we’ve found no gold bricks, jars of silver coins, or a secret garden gate key buried in a badger hole. Although John thinks we might have a badger…
Within the tangle of oregano lives a yellow plastic army man – he guards the plants with his rifle drawn. I stationed him there after digging him up in the yard, evidently forgotten by a child who played here years ago. That army man is doing a great job – we have enough oregano to open a pizza restaurant. And to say my cactus is thriving is an understatement. What began as a small cutting from my Nana’s cactus is taking over our side yard. Some people inherit jewels or antiques, but I have a family heirloom cactus. 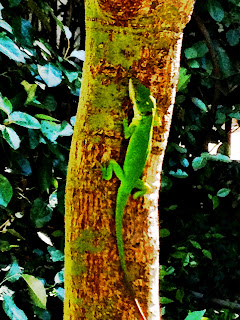 For such a small space, the life within it is pretty phenomenal. Along with bright green geckos, varieties of butterflies and a giant orange dragonfly that hovers and darts over the pool like the enchanted golden Snitch, we also have entertaining birds. A cardinal family built a nest on one side of the yard and the blue jay family moved in to the adjacent nest. They reluctantly coexist, but occasionally like the Bloods and Crips, there’s a confrontation.

Last weekend, a baby screech owl tried to move into the garden as well. Like nosey neighbors, the cardinals and blue jays lined up along the back fence protesting and gossiping as John fished the fledgling from the pool. Owls can’t swim, and this one was just learning to fly. I suspect the Angry Birds pushed the baby owl into the water. 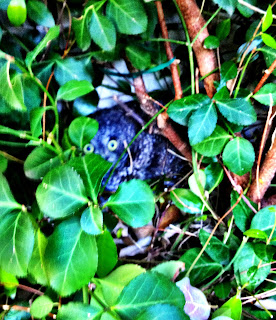 The owl has been relocated to a nearby bird sanctuary, the cardinals and blue jays are now settled back into their respective nests and two busy schnauzers are diligently patrolling the perimeter this morning. All is calm, all is bright in our garden refuge. 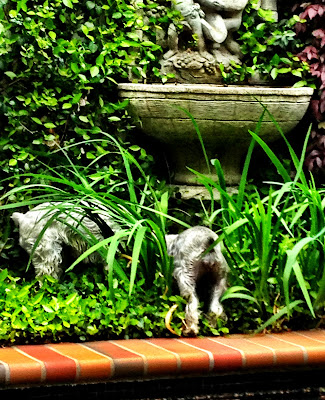 “And the secret garden bloomed and bloomed and every morning revealed new miracles.”
― Frances Hodgson Burnett, The Secret Garden

“If you look the right way, you can see that the whole world is a garden.”
― Frances Hodgson Burnett, The Secret Garden

This site uses Akismet to reduce spam. Learn how your comment data is processed.