When I was in high school, the Wilson Tavern in Wilson, Arkansas had the best all-you-can-eat frog leg buffet on Friday nights. They were slap yo’ momma good.

Frog legs are a true southern delicacy, and my boyfriend, Steve, could make an impressive dent in that buffet. Sadly, The Wilson Tavern closed, but maybe someone in Wilson still has that recipe?

During the hot steamy Arkansas summers, hours after sunset, Steve taught me to frog gig. We spent many a hot date trolling ditch banks in a john boat looking for frogs. Romantic, no?

Steve wore a flashlight strapped around his head like a coal miner. It takes two hands to properly gig a frog. The victims were thrown into a burlap sack in the belly of the boat where they jumped and twitched sporadically. With my feet holding down the bag-o-frogs, I watched for water moccasins in the low, overhanging tree branches. Mississippi County ditches were tangled with brush and twisty vines, the perfect hiding place for snakes, and each came with an intricately crafted beaver dam.

Frog gigging was not a sport for the faint hearted.

Recently at my neighborhood Dallas grocery store, I asked one of the workers to point me in the direction of the frog legs. She responded with a blank stare on her young tree-hugger face, as if I hailed from a far away galaxy.

After a pause she replied, “We have organic fruit from Frog Hollow Farm.”

I returned her stare knowing she wasn’t yet born when Yoda trained Luke Skywalker in that frog pond. Then she added, “And we sell organic wine from Frog Pond Winery.”

Apparently this particular grocery store was a big annual supporter of Save the Frogs Day. I didn’t have the heart to explain to the young grocery clerk that the cute little bright green and yellow tree frogs disappearing from the rain forests in Belize, with zero leg meat, aren’t the same ones we gigged in the swampy ditches of Keiser, Arkansas or ate at The Wilson Tavern. I kept this information to myself, paid for a bag of organic asparagus and politely left.

Soon I’ll be back in Arkansas for a visit. Maybe while I’m there, I will eat a platter of frog legs. They taste just like chicken. Only better. 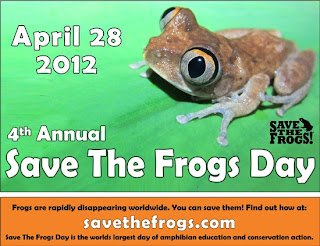 Kermit, “It Ain’t Easy Being Green”
Brad Paisley, “Mud on the Tires”