Yesterday was devoted to all things Baylor! The Tate girls crossed the Brazos at Waco for some smoking hot Lady Bear basketball. Brittney Griner is truly amazing – she should be the first woman Dallas Maverick – Dirk’s mini-me. She has already perfected his signature fade-away. And she does Barbara Tate’s famous hook shot from back in the day. The Aggies completely forgot to show up capping off a perfect day. It’s always a treat to beat an Aggie in any sport – basketball, football, golf or even a drinking game with the Aggie neighbors! Of course a trip to Baylor would be incomplete without a visit to traditional Waco hot spots. 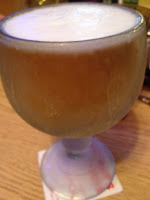 First lunch at Poppa Rollo’s Pizza – “the best pizza on Earth”. The hamburger, onion and jalapeño pizza would be my death row meal – not that Texas allows a choice anymore. One prisoner recently ruined it for everyone. We chowed down on the perfect pizza while watching The Little Rascals – a Poppa Rollo’s tradition. We cleansed our palates with pre-game Big O’s from George’s – the best beer on Earth. Cold ginormous frosted glasses – 3 Big O’s for only $9!!! It was a virtual time warp. My mother looked positively petite beside her huge beer, but she managed to chug it down without a booster seat. Over at the smoky bar, I could envision my first ex-husband’s fraternity brother drinking down an entire bottle of ketchup (topped off with tabasco). He did it because he could. And we played many electronic bowling games at George’s. It was addictive. It’s a miracle on the Brazos that any of us graduated. It took ketchup boy a long time… Staci and I were rudely jolted back from our memory lane trip by the young cute boy-waiter who called us “Ma’am”. Hmmmmm. What? We aren’t Ma’ams! It was that hideous warty thing on my hand that was giving me away!!! I knew it! Staci was just guilty by association.
And of course – a quick trip inside the Baylor Bookstore was warranted to restock bear wear and face tattoos. My inventory was low. From there, a windy stroll across Waco Creek to the Bear Pit. Waco Creek runs through campus from Eighth Street to Fifth Street. It’s really a neat, semi-natural, Baylor feature although oftentimes it is algae-ridden. It was extra clean today, on this coldest day of winter so far. Naturally, the bears were hibernating – we saw them inside all toasty and piled up together. Baylor has the most adorable mascot of all. Really. You know it’s true. Followed by the lovable hog of course. I don’t even know what an Aggie is.
As I studied the creek, I was reminded of the NoZe Brothers – a Baylor secret society founded in the 1920s as a joke surrounding a certain freshman with a very large nose. His nose was so big a club was formed around it – impressive. They are an irreverent and disrespectful group – extremely popular at Baylor. They poke fun at the Baylor yearbook, newspaper, faculty, student organizations, city of Waco and especially the Southern Baptist Convention. Let’s face it, through the years the NoZe Bros have had no shortage of Baptist Baylor/Waco topics with which to take aim, such as David Koresh and his Davidians, that murdered basketball player, etc. And the Baptists practically ask for it. 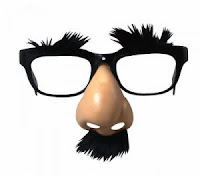 The brotherhood’s pranks are legendary. Based on the seriousness of their underground activities combined with the lack of humor of the current administration, they have occasionally been completely banned from campus. Through the years, they have crashed events such as chapel, homecoming and “Sing”. Their pranks have included turning the fountain pink (pink is the signature NoZe color), decorating the Quadrangle with huge NoZe glasses, and disrupting chapel with a donkey and a 4,000 ping pong ball drop. And when the statute of honorable Judge Baylor is wrapped in toilet paper, everyone knowz the NoZe Bros are to blame. But no one knowz who they are.

It is forbidden for a NoZe Brother to reveal his identity to a non-member. The members are always disguised with large fake noses, beards, crazy hats, etc. Each semester, the brotherhood hosts UnRush for non-members to present themselves for possible membership. Acceptance is limited and membership requirements are crazy ridiculous. There are, however, a handful of honorary NoZe Brothers – which are called Ornery Brothers. Dan Rather was Brother CBS Evening NoZe, Billy Graham is Brother Cracker NoZe Graham, and Robert Griffin III is HeismaNoZe Trophy.
When I attended Baylor in the early ’80s, the NoZe Brotherhood was fairly active, semi- banned from campus, but not to be controlled. During my spring sophomore semester, everyone was buzzing about an upcoming NoZe Bros gathering, announced in their underground newspaper – The Rope – which poked fun at the official Baylor newspaper – The Lariat. It was great fun to get your hands on the NoZe prose. A meeting was planned at midnight at the creek- all students were welcome. My roommates and I were pumped – we secured a ‘front row seat’ on the concrete retaining wall. The creek  was not very clean, with a few inches of water and leaves in the bottom. Quite a crowd had begun to gather, curious to see what the NoZe Brothers were up to now.
Just past midnight a glow appeared in the tunnel at the end of the creek which snaked underneath campus to the Brazos River. The NoZe Brothers were marching, carrying torches, and chanting something nonsensical. They looked eerily like the KKK walking through that tunnel deep below Baylor, in the dark night. As they approached us, they began their “program”, speaking primarily in NoZe code – blasting the administration for the ridiculous new ugly fountain. I had no idea what they were talking about for most of the “show” but they were absolutely hilarious. Who were these guys? I wonder if I knew any of them? Did I sit beside any of them in my classes?
Suddenly head NoZe Bro walked right up to me, grabbed my hand, and jerked me to my feet and into the creek. OMG were they kidnapping me? If I had to go inside that tunnel I would freak – I just knew there were Brazos River rats in there. They quickly wrapped a cape around my shoulders – like a velvet cape a queen would wear – and placed this big obnoxious crown on my head. I was embarrassed! Then king of the NoZe – I had no idea of his official title – paraded me through the wet creek and announced that I was Miss Middle Class White Trash America. Oh my! How did he know I was from Mississippi County? Really, it was hilarious. I made the most of it, glad no one could see my red face in the glow of the torches. I never came into direct contact with the NoZe Bros again, to my knowledge. Or maybe I married one? Who noZe? They are totally sworn to secrecy.
Later, while working at State Bank – an entirely different kind of brotherhood – we all had nicknames. Maybe it was a natural progression that came from working together so long. My nickname was The Snoot. BecauseIhaveSuchaBigNose.  A very NoZe Brother-ish name. And I also wrote an underground bank newspaper – The Snoot Report – available to only a very few and primarily for my own entertainment. The NoZe Bros have always inspired me – since that night in the creek.
I tried to find The Rope yesterday but never saw one.. I bet the Bros are having a heyday with self-ordained Robert Jeffress, pastor of First Baptist Church Dallas. I’m sure Jeffress thinks the NoZe Brotherhood is a cult, along with those pesky Mormans. He provides no shortage of fodder, I’m certain. I wonder if the NoZe Bros need a blogger? I knowz the perfect candidate.


Louis Armstrong, “When the Saints Go Marching In”
Marty Robbins, “Cross the Brazos at Waco”
Jake Holmes, “Be a Pepper”