Once upon a time, not so very long ago, we were the proud owners of an entire fleet of vehicles – one vehicle per television. It was obscene. We were over our limit primarily because Kelsey had graduated from college and relocated to Washington DC. A car was impractical in DC – they have trains. Dallas has the light rail which is awesome but the coverage is limited – perfect for a trip to the zoo. So, our driveway had become a used car lot. Nice.
Our neighborhood was platted and developed back in 1905 by cotton gin genius Robert Munger. Munger made a fortune and quite a reputation by actually improving Eli Whitney’s cotton gin, holding numerous patents in this category. Thanks in part to Mr. Munger, Dallas became the world’s leading manufacturer of gin machinery and largest inland cotton market in the U.S. in the 1890s. I was destined to live here given my family’s cotton roots. Even with Mr. Munger’s amazing foresight, he never envisioned 100+ years later harried families would maneuver entire squadrons along the single-file driveways that line Munger Place homes.
So every morning a game of musical cars ensued at our house. In the rain, wind, sleet, snow or blazing sun, without fail, before sunrise… Invariably, the person who first came home Monday night needed to leave before sunrise on Tuesday morning. Or vice versa.
Our next door neighbor parks a “FunFinder” camper in his single-wide drive. The moment we broke ground on our pool, Mr. FunFinder ran out and made this purchase, obviously thinking that with all the dirt moving equipment in our postage size backyard, the neighbors (we) wouldn’t notice or care. Of course the dirt movers were here and gone, the pool is peaceful and relaxing, and the view includes the FunFinder, which is yet to be much fun. We are thankful for it; however, as without it parked next door, I feel certain we would have attracted the hysterical district folks with our growing used car lot. 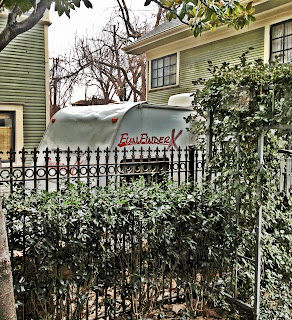 It is just not in the cards for us to have normal neighbors. At our prior home, we had a drug dealer. She was a full blown, full time drug dealer with deals being consummated all day long in our shared driveway. The police were aware yet apparently unable to prevent this – bigger fish to fry and all. Why can’t we have nice gay neighbors like Mitch and Cam? Neighbors who watch Glee and keep their property home tour ready.

Morning musical cars is a pain. Just like musical chairs in Ms. Jones’ music class in 4th grade. It stressed me out. It was so competitive, and I was not. My classmates were vicious about claiming a chair. There were always those kids that barely scooted from one chair to the next, just hovering over the chairs to insure a place to plop their rears when the music stopped. Then there were those who sat down on top of you when you had already claimed a chair – like you were invisible! Likely, I was. I avoided attention, so if I was ‘out’ and everyone looked at me, I wanted to disappear inside myself.
Ms. Jones also made us play Farmer in the Dell. If I couldn’t be the farmer, I didn’t want any part of it. And girls were NEVER allowed to be the farmer. When the ‘farmer takes a wife’ part came around, you sure didn’t want to be picked if the farmer was a dork. Like it was binding or something. And we were all dorks in 4th grade, weren’t we? When ‘the nurse takes a cow’ – omg who would want to be the cow? No one. Or a rat or the cheese? The whole thing was cheesy in my opinion. This was simply a way NOT to learn music or sing – a teacher’s babysitting song. Not that I blamed her. When they were young, my kids spent lots of time playing The Quiet Game on that long drive to Norfork Lake.
In addition to having too many vehicles, we were paying way too much insurance. More cars than people, more people than televisions, more insurance than was needed! My new mission was to sell a vehicle, any vehicle (the one in the back of the lineup?) and reduce our insurance expense. Insurance is super high in Dallas because una tonelana of the motorists were uninsured. It’s a fact.
John had begun to drive Kelsey’s car because it somehow ended up at the back of the line or parked on the curb and was easier to access. But that’s the car we decided to sell so we spiffed it up and found a buyer. Meanwhile, John’s hot-rod Lincoln was buried deep within the garage and had not been driven for months. It was coated with dust. Dust from the January ice storm. It was now Labor Day weekend. I felt sorry for it.
As we ate dinner one night – two days before the red car was to roll off the lot – I asked John again, about the Lincoln. “Have you started the Lincoln lately?” “No, but it will start.” NoWayinHell. “John, it won’t start. It hasn’t been driven for months.”
“It’ll start.” He insisted. “It has a new battery.”Define new?
Ok I’m a practical farm girl. I know that if you don’t start your car at least every few weeks, it will be deader than a doornail. It just will. Use it or lose it. But he was sure it would start. Our son and his girlfriend joined in on the exchange. They were with me on this. We continued to debate until finally, during the middle of dinner, after discussion ad nauseum, we all jumped and ran outside, determined to end this ridiculousness once and for all. There had been times my car wouldn’t start at the airport after just a one week vacation. Did he have a super duper battery made for the surface of the sun? Opening the gate outside, John asked me, “You wanna bet?” Oh, he was so overplaying his hand.
{STOP! The remainder of this post contains TMI. If you have a sensitive stomach or are easily offended, pretend this is the end and imagine your own conclusion. You KNOW the car didn’t start, right?}
As we walked into the hot garage, the kids hung back in the yard watching from afar no doubt thinking we were nuts. John leaned over and whispered to me, “What do you want to bet?” “Whatever.” There was no way I was going to lose this one. John was smiling and looked all pleased as punch. Was that a twinkle in his eye? “Ok, if I’m right,” he said, “and the car starts, we have sex all week, whenever I say. As much as I want.”
“With who?” I ask. “With each other!” he sounded exasperated at this point, which was part of my plan. “Sure, fine by me,” oh like he was so deprived. “And when the car doesn’t start?” I added, “I make the rules for the week.” We shook on it. He was so excited, looking ahead to his incredible honeymoon-like week – probably planning a week of vacation. And, he NEVER took vacation. Opening the car door, he climbed inside, stuck the key into the ignition, and nada, nothing, not a sound. Of course. Ha!!!!!!!!!!!!!!!!! I knew it! The look on his face…. I thought he might cry as his dull, boring week flashed before him. I did a victory jig. He was sad and beat down. He shuffled back into the house all hang-dog and pathetic. I’m not sure he could even finish his meal. I happily skipped inside and went on about my evening.
Later that night, I explained my rules for the upcoming week. I was still up for the “all you can roll in the hay” buffet, but at $200 a pop. Bingo! There were no losers in quiet little game of musical cars. That week, the tellers at the bank wondered if I had a gambling problem (probably even filed a SAR), and in a way, I guess I did. Men respond to money. They speak that language. As do I. Winner Winner Chicken Dinner.
Now that we have sold one car and another is off to college in Fayetteville, we are thankfully down to only one car per Schnauzer. But still we have too many televisions.
talya
Musical Pairings:
Keith Urban, “Making Memories of Us”
Darius Rucker, “Alright”