This would be an excellent time to rob a bank. It would likely go unnoticed, unless during the process you also shoot a singer or actor in the teller line. For the next few weeks, until another Hollywood darling dies, serious news will go completely unreported.
Ok so yes, Whitney had an amazing voice, especially 10 years ago. She was beautiful. I really liked The Bodyguard, but primarily because of Kevin Costner. And now she’s gone – much too soon – likely from a drug overdose (prescription or otherwise). Or maybe it was heart failure – your heart can only endure so much abuse. Regardless, she sadly did this to herself. It’s terrible. I feel bad for her daughter and her family and her true friends who probably saw it coming. But, people – we did not know her. Why are we so interested in this? During the first full hour after the news of her death, there were 2,481,652 tweets and retweets (per MSN.com), peaking at over a thousand tweets a second! Hmmmm. When this news exploded, my sister, mom and I were driving back to Dallas from Waco. My mother received several phone calls and text messages about this. Really? Apparently Osceola was all torn up.
Why not devote hours and tweets and blogs and tears and news reports to soldiers who have died in Afghanistan protecting Whitney Houston’s freedom? Isn’t that newsworthy? CNN will pontificate about her death for weeks, while young unnamed men leave behind devastated families and friends every day serving our country.
Was anyone surprised when Michael Jackson died? Really? The King of Pop was bizarre and mixed up and sad. We felt like we knew him, growing up with “Rockin’ Robin” –  back when he still had a nose. I saw him sing Thriller in person. He was an amazing entertainer. But when he died, I wasn’t surprised in the least.
And Amy Winehouse? She bragged about her addiction, singing about her refusal to check into rehab. Oh let’s give her a Grammy for that. 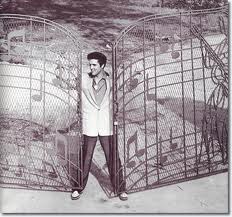 Now I will admit, when Elvis died, we were devestated. People sobbed at the pearly gates of Graceland – and still do. But this was Elvis, and it was a different time. His downhill spiral wasn’t as obvious – we weren’t force-fed his every move by the media back then. His death was a shock.


Living just across the Mississippi River near Memphis – Elvis was practically our neighbor. When he was home at Graceland, the Commercial Appeal often printed handsome photos of Elvis giving away diamond rings and Cadillacs to his nurses. Ok, so this should have been our first clue – Elvis had nurses…? Who has nurses? Michael Jackson? On the occasions he checked into the Baptist Hospital for “exhaustion”, Momma and Nana immediately loaded us into the car, and we drove to Memphis. We circled around and around the hospital, with Staci and me hanging out the windows like dogs, trying to catch just a glimpse of the King. His top floor hospital room was easily identified – the window was covered in aluminum foil. This was our entertainment. So yes, we were very distraught when he died sitting on that toilet. We were still hoping for a diamond ring.
I’m just gonna go right out on a limb and predict LiLo may not be long for this world. Wild guess.
RIP Whitney Houston
talya
Musical Pairings:
Third Eye Blind, “Semi-Charmed Life”
Whitney Houston, “Didn’t We Almost Have it All?”
Elvis, “Are You Lonesome Tonight?”