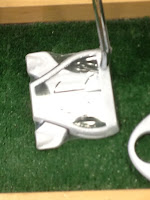 So does anyone know what this strange object is? NO – it’s not a Geiger counter or a radiation detector. Nor does it detect uranium. It isn’t some type of land mine device. Give up? It’s a putter. As in golf. When did this happen? When did putters start looking all star wars-ish? And white? That just seems strange to me. Not that I know anything about it.
Obviously I haven’t been to a golf store in a while, but I tagged along with John last week in the middle of a downpour, nearly ruining my cute J. Crew shoes. As John was checking out, I was checking out the odd putters.
When did putters become square, resembling a piece of Mrs. Baird’s white bread? Are golf balls square now too? Does a square putter help you square up the ball? Does a glow-in-the-dark white putter help you remember to pick it up and place it back into your golf bag when you get pissed and sling your club across the green? I’m certain if that thing wasn’t obnoxiously sticking out of your bag by the time you reached the next hole, it would be missed by everyone in your embarassed foursome. It’s humongous. About a size 6.5 ladies Keds – DD width. And how enormous drivers must be now – like a football?
This peculiar putter might come in handy if you play on the municipal golf course behind the country club in Osceola (my home town) which is home to the occasional water moccasin. It could also double as a sickle when you shank the ball into the wheat field rough. Oops, ball in the lake? This thing is your tool. Add a bit of twine and you might just reel in a catfish for dinner. I bet Chef Ernestine would probably cook it up while you drink your White Zin in the bar. But if the fish aren’t biting, I recommend the blackened shrimp – delicious! And Bartender Tee makes an awesome extra dirty martini if Beringer isn’t your thing.
Seriously what self-respecting golfer uses this putter? Do they grow at the same rate as flat screen televisions? Doesn’t this take some of the skill out of the sport? 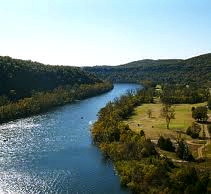 I’m not a golfer, but I made my first hole-in-one on July 4, 1996. John and I were playing at the Rivercliff Golf Club at Bull Shoals, Arkansas. The front 9 runs along the White River which is glorious. The back 9 is hellish with rocks and cliffs and no trees – almost like a rock quarry. I made a hole-in-one on the 7th hole with my 3 iron from the red tees. It was a par 3 over a little creek. (I only know the specifics because John memorized the details and magically pulled the scorecard from the bottom of a drawer this morning – 16 years later. This man who can never find anything…)


John was really, really excited when it happened. I thought, “Well that’s pretty cool,” but mainly I was already tired and hot and ready to jump in the lake. Another couple that we didn’t even know drove up in their cart all ecstatic about it too. Apparently it was a huge deal. Then I looked and John and said, “Ok now you do it.” He wacked the crap out of his ball, slicing it straight into the trees and bogeyed the hole. Hmmm.
I didn’t want to even finish the back nine – which was rocky and mountainous. It was 100 degrees that day. John informed me that if I didn’t finish the entire round, my hole-in-one wouldn’t ‘count’. Count? How could it not count? I did it. Everyone was super excited about it. Where is it counted anyway? On your permanent record? It counted to me. That’s all that mattered. But we finished the round. All the deliriously happy men in the clubhouse gave me an ugly purplish golf hat. And then I suppose they officially recorded it somewhere so that it ‘counted’. On the way back to Mountain Home I innocently asked John, “So how many of those holes-in-one do you have?” He looked at me as if I was speaking Mandarin. Maybe he worried too much about it – tried too hard? I had taken a few lessons, played about 10 rounds, got my hole-in-one and retired from that sport. What more was there to do? Apparently I peaked quickly.
When I returned to work after vacation, Mark Channels, the bank CFO, would not speak to me for weeks – so upset about my ace in the hole. He said I hadn’t “earned” it. I hadn’t put in the time. It was a lucky shot. I didn’t deserve it. He was worse than any mean girl in 9th grade. His lip quivered he was so angry. Wow. I’m sure he’s still bitter about it.
I haven’t played in years, but when I did, my putter looked nothing like that ugly white geriatric walking cane. Of course with a single perfect stroke you don’t really have to worry too much about your putter.