Punxsutawney Phil may be all super important and reliable up North, but clearly, his power does not extend to Dallas. It’s high time we had our own prairie dog or badger. We need a critter more in touch with Texas extreme temperatures. With 80 degree temperatures this week, its Easter-like. I’ve resigned myself that we have been totally gypped out of even one bowl of yummy snow cream this winter. I may go ahead and break out the spring wreath, but I hate to jinx it. 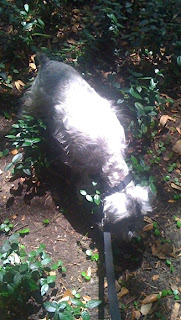 Lucy and Annabelle have been taking me on extra long walks this week. On Wednesday it was even warm enough for a short sleeve Dallas Mavericks t-shirt (of which I have a large collection), even at 8 a.m. We strolled along the neighborhood, with the dogs straining on their leashes, optimistically trying to catch those pesty birds. As a fun bonus, every house in this neighborhood comes with a cat on each wrap around porch, whether wanted or not. They loll about on the sidewalks in front of their respective homes, stretching and cleaning themselves, just teasing and taunting two little Schnauzers. Overhead the trees are already budding out. Those elusive squirrels who live high above seem to realize they have stored way too much inventory this season as pecans coincidentally fall near us like heat seeking missiles as we walk. There is no sign of winter hidden anywhere in the neighborhood. We did, although, get a double dose last year, so it evens out I suppose. In the distance I heard the unmistakeable screech of brakes – that terrible sound signaling someone ran a stop sign and then slammed on the brakes mid-intersection with their arm no doubt extended across the passenger’s side, whether or not there is a passenger or a phantom bag of groceries in that seat. I waited for the crash but thankfully, there was not one.

John was rear-ended last week sitting at a red light on Live Oak in our neighborhood. He was on his way to an early morning dentist appointment before work. I’m sure in his mind he was already at work when the driver smashed into his bumper, jolting him back to reality. Fortunately, the driver produced insurance information and provided his name. In East Dallas, this is a favorable sign. A few days later, of course, John was informed by our insurance agent that this person does not exist, there is no such insurance and all the information provided was fraudulent. According to the Dallas Morning News, of the 17 million licensed drivers in Dallas, 25% are uninsured, making our roads extra-hazardous. And I’m certain 50% of the 25% pass through our neighborhood daily on the way to the border. It’s more than slightly annoying.
As we continued walking, I thought about doing some yard work later in the afternoon or maybe taking Lucy and Annabelle to the dog park… Just as we turned the corner, making our way back home,  Annabelle spied something nestled in the thick grass between the sidewalk and the street. She stopped in her tracks like a Pointer with her nose down hot on the trail of something. Her friend Dora must have taught her this trick… The item that caught her eye was partially hidden but glistening in the overgrown grass – almost sparkling. I bent down to see it more closely. Oh very nice. It was a condom. Obviously used and totally disgusting. Fortunately, I quickly identified it before Annabelle could claim it for herself, smuggle it home and hide it behind the sofa pillow for John to discover later. Lucy once hid an entire package of frozen corn behind the pillow on the love seat….That was interesting, but finding a nasty used condom one night while lying on the couch watching Modern Family might be a bit too interesting. We aren’t that modern.
Nastiness! On such a glorious Ash Wednesday. 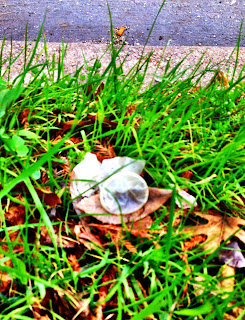 Who is having car sex in our neighborhood and being a litterbug at the same time? Now, I have nothing against a little something-something wherever/whenever, and kudos for wearing a raincoat, but I hate litterbugs. Maybe that non-existent person who smashed into John’s car was distracted because he had just had vehicular sex on the way to work, tossing the evidence out the window in our neighborhood. That could just be distracting enough to run a red light. On the bright side, at least someone in the hood was practicing safe sex which could potentially keep one future uninsured motorist off the Dallas streets in 16 years. But please, in the spirit of the boy scouts, leave no trace.