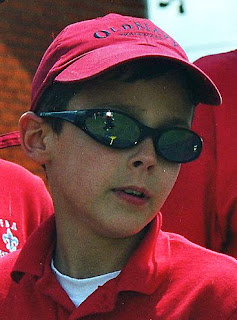 We groomed Kelsey and Tate to be Razorbacks from birth. Growing up, we took them to football and basketball games, hoping that someday they would choose to go to college there. It didn’t work on Kelsey – we weren’t really surprised. She was too much of a Texas girl, actually preferring 115 degree days, flip flops and burnt orange. It was a good fit for her, and once John got over the initial shock, I think he agreed. John is a Razorback alumnus who still has childhood memories of tough Hog-Horn games from the ’60s. Kelsey brought John a huge longhorn flag, during her first trip home as a freshman. He was speechless. “What do I do with that?” He asked me. We flew it off the front porch on Texas-OU weekends. She seemed ok with that. We continued to hold out hope for Tate. Red was his color.
Tate toured several colleges his senior year before making his decision – Oklahoma, Oklahoma State, University of Colorado, Colorado State. He had already ruled out all Texas schools – he wanted to escape the heat. He wanted a smaller city. He wanted to see trees and nature. We never pushed or threatened or begged. There were no tears. We just silently prayed. For years. We wasted no prayers on health – we were dedicated to the college decision. We thought his entire weekly laundry load of red Razorback wear was a good sign. We crossed our fingers.
He loved the State of Arkansas. Since birth he had vacationed at Norfork Lake in Mountain Home, as well as Hot Springs. It was his second home. Even though most of his friends were headed to Texas Tech, we held out hope. Finally, after weighing all his choices, he announced he had decided to go to the University of Arkansas. We were cool. We didn’t act as thrilled as we felt. When the acceptance letter came, we didn’t call the hogs or skip and go naked or anything. We were cool. John and I didn’t chest bump or high five or express our sheer joy – at least not in front of Tate. We did not want to do anything to jinx ourselves. Not until we moved in his few boxes and drove off – then I may have done a cartwheel outside Maple Hill East. It was one of the happiest moments of our lives. Tate was a Razorback.

He jumped right in, met lots of new friends, memorized the Fight Song, learned to drive to Target and found a place to get his hair cut. Pinch me… John was walking a bit taller.
The nest was clean and quiet which was bit strange, but really pretty nice. Why did my friends mope about? Isn’t this the goal? Don’t you want your kids to leave? I’ll never understand. I knew plenty of people who couldn’t pry their kids out of the house. Or, they showed back up with grandkids in tow. All that hard parenting work had led to this peaceful moment in time. Nice.
Within one month, Tate called home and said, “Mom, I have some news…”, he sounded strange. “Oh, no, no, no.” What could it be? He’s wrecked his SUV or he hates school… I felt a bit nauseous. There was a pause.
“I’m a vegetarian.”
WHAT??? SERIOUSLY??? At Arkansas? “Did you secretively transfer to UT? AreYouInAustin???!!!
How does that happen? I had completely trusted this school and the people of this state with my only son, and within thirty days he had lost all core food values??
Kids don’t go off to Arkansas and become vegetarians! They just don’t! They go off to college and gain the Freshman 15 eating pizza all night. Tate was a full-time-red-meat-eating-carnivore. What about Herman’s Ribhouse? He loved that place! That gigantic plate o’ribs with the Texas toast??? And his regular diet of Chipotle burritos as big as my head stuffed with brisket and chicken? This was bad.
Kelsey had been a vegetarian for years now – since she was in junior high. She gave up meat for Lent one year and never looked back. But she attended the University of Texas – in Austin. It was a prerequisite. Everyone in Austin was a vegetarian. The food was organic and local and blessed by tree huggers. They try to keep Austin weird. It’s the city motto. But in Arkansas???? WhereHadWeGoneWrong??? John and I sulked around all night, as if we had found out he was making meth on a hot plate in his dorm room.
Tate had his reasons for this drastic lifestyle redesign, one of which was his Anthropology teacher had ‘challenged’ the class to do this. And apparently that’s all it took for him to jump on board with both feet. Totally committed. Do not pass Go, do not collect $100. His teacher suggested it, and he was in. I needed this professor’s phone number. She must be hot. I would just start feeding suggestions to Tate via his Anthropology teacher.  We had worked for 18 years to make him a Razorback. Carefully, nonchalantly, tiptoeing around the Hogs, knowing full well if we even pointed north up Central Expressway toward the Red River, there would be no way it would happen. Also, apparently, he felt Tyson Chicken was not treating its animals humanely. What were they teaching him at that school?! My child who LIVED on bags of buffalo wing flavored frozen Tyson Chicken strips in high school? And, he went on and on about how the cows in South America ate better than the people there. I didn’t care about those people or cows! We don’t get our beef from South America! Let them worry about their own people. I was concerned about myself and my son and how this particular decision was going to change my holiday meal planning! Who WAS this person and what had happened to Tate? I did not recognize his voice on the telephone. He was worried about international beef grazing? When he came home for his Thanksgiving portabella mushroom, he actually made his bed.
Sadly, our turkey that Thanksgiving was the smallest one yet. But I treated it with the utmost respect in case the kids were watching me brine it. Kelsey and Tate both ate only side dishes, which I was forced to make with water and air instead of cream of chicken soup and bacon fat. All delicious holiday sides include cream of chicken soup. Everyone knows that. Still a vegetarian on Christmas Eve, he passed on John’s fabulous beef tenderloin, smoked on the Green Egg. His best tenderloin yet. We enjoyed lots of leftovers while Tate ate vegetarian beans all month. He looked gaunt.
In a month, Tate will be off a week for his first college Spring Break. While everyone else goes snow skiing or enjoys a caribbean cruise, our spring break tradition is Oaklawn Park in Hot Springs. We always go to the horse races. One year – when Tate was in elementary school – we discussed changing up our routine and possibly going somewhere else. Tate was distraught. “No, I want to go to Hot Springs. It’s the only place I can earn any money.” We raised this child right. Staci and I went to the track as children with our parents. Daddy was skilled at picking the horses, and he tried to share his knowledge with us. He gave us a small ‘allowance’ for the track, teaching us to gamble at an early age. And then we passed this skill down to our kids.  Even as young child, Tate studied the racing program and tip sheets the entire night before the race, ranked the jockeys for each race, selected all his horses and budgeted his money. He never spent this sort of time on his homework. Now I just wait and see who Tate likes before placing my bets.

Tate’s money was always for picking horses and placing bets. My money, or John’s money, or Nana’s money, was for ice cream, (mistreated) chicken strips and everyone’s favorite – the Oaklawn reuben sandwich. At $6.50, the reuben sandwich at the track is the best bet of the day. By a long shot. At the end of the trip, Tate always left with more money than he started. He was little Thomas Tate. Still is. Daddy would be proud.
For the first time, Tate will actually be old enough to place his own bets this year. In our family, this is a proud rite of passage – like voting for the first time, graduating from high school, or making that first paycheck. Placing a bet! It’s a big thing.
Tate called last week to discuss a dentist appointment and his housing for next year. He sounded happy and mature and totally together. At the very end of our conversation, as we began to hang up the phone, almost as an afterthought, he said, “Oh yeah, mom. By the way, I’m eating meat again.” Oh yay oh yay oh yay!! I knew he couldn’t resist those Reuben Sandwiches! Of course, I didn’t act excited. I was cool. I didn’t want to jinx it.