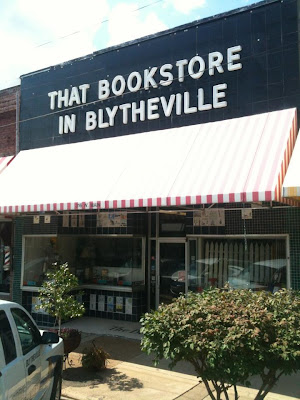 Mary Gay Shipley has my dream job. She is the proprietor of That Bookstore in Blytheville near my hometown.  I recall in the mid-1970s when she first opened the store, it was The Book Rack.  At that time, it was more of a used book exchange.  Nearly every week, my mother walked into The Book Rack with a stack of paperbacks to trade and walked out with a new stack of volumes to read, fueling my addiction at a very early age. Of course, this was after an hour of browsing and chatting with the ladies there, who could always make wonderful reading recommendations over a cup of coffee. The book exchange idea proved to be a great recycling program, if you are one of those people who can let go of a book. I cannot.

For years, everyone simply referred to The Book Rack as “that bookstore in Blytheville“. I suppose Mary Gay decided to go with the flow, as eventually she officially renamed it. I doubt I have ever been to Blytheville without stopping there. It’s actually the reason to go to Blytheville. It’s a destination, not just a quick side trip on the way home from someplace else.

Mary Gay has attracted many impressive southern authors to book signings and readings, thus I have amassed quite an impressive collection of signed first editions.  I treasure these books. When our house nearly flooded a few years ago, I was fully prepared to strap a bookcase on my husband’s back, if necessary. I have many, many more autographed books than shoes. It’s not even close.

If I ever move back home to Mississippi County, I plan to occupy the storefront until Mary Gay agrees to hire me. I have thought this through and feel certain that it would be to her advantage. She needs an understudy.  She has earned an understudy – someone who appreciates all things southern like whipping up the perfectly balanced pitcher of mint juleps or executing a successful late evening snipe hunt among friends.
I would cheerfully fetch John Grisham from the airport for his book signing events, engage him in clever conversation about soybean futures and discuss his latest protagonist during the drive to Blytheville.
One day I hope to see my own book for sale on the shelves at That Bookstore in Blytheville complete with an endearing quote from Mary Gay Shipley on the back cover. That is on the very TOP of my bucket list. (The understudy position is a teeny bit further down.) But honestly, I’m not a stalker, just a fan. I swear.