My favorite shops are those located in old buildings or houses like this one. If I can poke around inside a charming old house while shopping, I’m more likely to buy something. That’s a fact. The new owners, Jeff and Stan, who welcomed us like old friends, have done a fantastic job transforming the inside space while maintaining the wonderful facade. Go to browse. Get inspired. Clear your head. Buy yourself a little gift. You will easily find something for every room in your house. Dangerous, I know. And guess what? There’s a hair salon too! Check out the vivid summer colors of this pottery line. I bought this cute little bird hook for the powder room. For whatever reason, none of our bathrooms have towel racks. Whatsup with that?  This bird hook is perfect. It’s made of iron, is sturdy enough for a towel or even a robe, and is painted in a distressed blue-green color. Comes in gray too. If I lived on a lake or had a beach house, I’d decorate around this fish stoneware because I HEART polka dots:)) Van Morrison, Bright Side of the Street 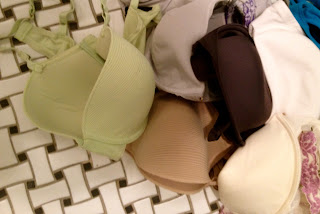 I HATE every single bra in my underwear drawer. I remember when I couldn’t wait to wear a training bra. I’m sure I pestered Momma about it until finally she took me to Belk’s in Osceola and bought one for me whether I needed it or not. TinyLittleCottonCuteThing with pale pink flowers. Such a rite of passage.  But sadly, it was a lemon. Apparently the ‘girls’ were never properly trained on how to be comfortable in the grown up underwire contraption.
Remember when the annoying boys popped your bra strap at school, mainly on the playground? It was embarrassing, but not needing to wear one was even worse. Even then, in those early years, the silly smelly boys knew it really worked better as a slingshot.
Today, I do have one that I semi like. Yesterday when I put it on, the wire clasp was sticking straight out like a thumbtack in my backbone. I was too annoyed to find the pliers to solder it back into shape, so I tossed it smooth ass into the Goodwill bag. Do they really even want used bras?
My friend told me about these wonderful bras at Target that are super inexpensive and eliminate back fat! They are pretty great other than I think the fat just gets oddly redistributed to the underarm area. Plus there is a bit of the uniboob look going on which is less than pleasing. The girls need to breathe.
Nineteen years ago, I had a nursing bra I loved. I wish I still had it.
Several years ago, Oprah declared 8 out of 10 women wear the wrong size. She devoted an entire show to this topic, and women of all ages and shapes and sizes were absolutely giddy to be measured on national television in ugly, misshapen bras. To their delight each discovered they were not a 36B but a 32DD or a 34C. There were Gs and Hs and LMNOPs. All the ladies left glowing and seamless with zero back fat, looking 15 years younger, 3 inches taller and 25 pounds lighter. Evidently, Oprah has that life-changing affect on people.
So since Oprah knows everything about everything, I decided to get measured at Nordstrom’s where the official certified fit specialist and I became super friendly in the changing room. She measured the chicas from top to bottom, up and down and all around. It was bit awkward, but I was ok with it, excited to finally learn my true size after all these confining years. The skilled bra whiz calculated and totaled and measured while I realized this must be one of those rare uses for algebra…After a pause and a virtual drumroll in my head, she declared I was exactly the same size as I thought. “Really? Did you calculate twice? You should always total twice in any accurate math problem,” I reminded her. Apparently I just had crappy, uncomfortable bras in the right size? This was NOT my a-ha moment promised by Oprah!
The so-called fit specialist, whom I now doubted, helped me put on bra after bra, searching for that perfect one, as if I couldn’t fasten it myself. I could do that with my eyes closed balancing in tree pose. I can take a miserable one off in seven seconds flat driving down the highway without removing my shirt. Not that I’ve ever done that. Nevertheless, she made adjustments with her cold hands much like the dreaded mammogram but without the physical torture. I did end up with a bra I semi liked which is now the one in the Goodwill bag.
In high school one year, the annual musical was Oliver. I had a lesser role as a pickpocket, along with several of my friends. Because the pickpockets were all boys, we had to bind ourselves before each performance, using something like ace bandages. This pickpocket tourniquet was more comfortable than any bra I currently own. I wish I could remember exactly how we did it. Maybe Mrs. Brasfield remembers?
If I can stomach it, I shall go today in search of a comfortable, life-changing bra. But I may be walking in braless.
Anyone need a slingshot?
talya
Musical Pairings: (no pun intended)
“Girls Just Wanna Have Fun”, Cyndi Lauper
“Somewhere Over the Rainbow”, Norah Jones
“The only gossip I’m interested in is things from the Weekly World News – ‘Woman’s bra bursts, 11 injured’. That kind of thing.”  Johnny Depp