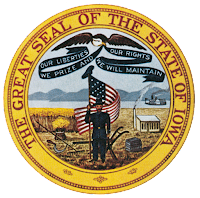 So the Iowa Caucus is over. After all the coffee drinking and hand shaking and slobbering on cutie patootie babies, seems like it was a wasted effort. First Mitt Romney was declared the winner – wait just a minute! NotSoFastMittens. Someone in the back room recounted, or found some more ballots on the floor, or forgot some ballots were left on the copier and suddenly Rick Santorum was ahead by 34 whopping votes. Then, the party confessed that maybe some votes went missing. Left in the bathroom and accidentally thrown out? Hmmmm.

So now it’s being touted as a three way tie – everyone won! – yippee! – trophies and pizza all around! – a triple header – sounds as American as apple pie if you use baseball lingo to describe the confusion. Triple losers. What’s a nation to do?
Iowa sets the tone for the entire election. Iowa goes first. Apparently no one can decide who to vote for until the normal regular people in Iowa decide for us. Kinda like ordering dinner at a restaurant. Sometimes you just can’t pick something off the menu until you hear what your best friend is having. Sometimes you don’t understand the menu – it’s written in Spanish or very fancy words – so you need someone to translate or even order for you. Sometimes you order something that you saw advertised – it sounded really good at the time but later it gave you serious indigestion. Or diarrhea. Sometimes you just can’t see the menu because you forgot your cute Kate Spade readers – you accidentally left them in your other purse. Or, maybe you think you want the Chicken Caesar Salad, hold the croutons, with the dressing on the side (you have been going to yoga and really trying to shrink the burrito that has formed around your waistline), BUT then your husband orders sour cream chicken enchiladas with chopped onions and a side of white queso. Suddenly you change your order. And you order iced tea with lime until you realize everyone else at the table is ordering a top shelf margarita. So you change your order. You don’t want to be different. Sometimes you aren’t even hungry.
Everyone, across the nation, is hoping and praying that someone – anyone – just a normal regular girl with business sense and common sense will throw her hat into the ring. Someone who would never ever tie her Schnauzers to the roof to drive to the dog park, much less to Canada. Someone who doesn’t need an exploratory committee to know we can’t afford a 51st state on the moon – we can’t take care of the 50 states we have. Someone who knows that people will be bored to tears by a man in a Mr. Rogers sweater vest.
I don’t know that much about caucusing. I’ve never caucused – I just go vote when the polls are open. But, just to satisfy my own curiosity, I did conduct my own exit poll after the last democratic caucus in 2008 –  among my co-workers. As I suspected, no one who participated knew the first thing about what they were doing. I admit, my poll was in no way scientific – more of an SNL kind of thing. The answers confirmed to me that Iowa should decide for us – at least for my co-workers. Iowa’s been doing it a long time. They seem really into it. And, they probably don’t have much going on in the wintertime, so they can adequately prepare. The question posed was: “Did anyone at the bank participate in the caucus yesterday? If so, how was it?”
Results: (direct quotes – some names changed):
Seriously OMG.
Sometimes you just lose your appetite altogether.
Oops….
talya
Musical Pairings:
Gnarls Barkley, “Crazy”