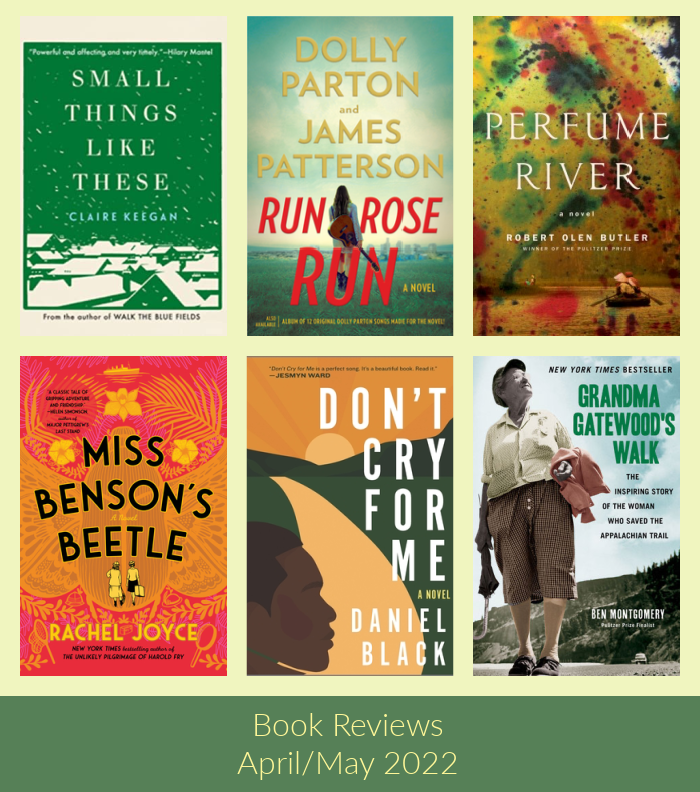 For the first time in a long time, so many things have kept me from reading. I credit the same things for my lack of blog postings. Sooooo, today I am finally bringing a few recommendations to you, combining my book reviews for April and May. Let’s be honest—this is a little pitiful—we are midway into June, and here I am talking about April and May.

Nevertheless, here are my book reviews for the past couple of months.

There are a few real gems here, so I didn’t want to not tell you about them. This small book (128 pages) is not a small thing. Set in 1985, this story is about a quiet, working man who is confronted with an awful Catholic church coverup. He must decide whether to buck the system and do the right thing or ignore what’s going on and pretend all is well.

Small Things Like These is a beautifully written, moving story. It is set during Christmastime, so if you prefer to match books to seasons, save this treasure for a stocking stuffer.

Favorite Quote: “…he found himself asking was there any point in being alive without helping one another?” I adore Dolly Parton, but this book fell pancake-flat for me. I found it to be predictable and riddled with cliches, and the multiple Audible narrators, with widely varying skill levels, distracted from the story.

The plot: AnnieLee escapes to Nashville with nothing other than a talent for song-writing, a beautiful voice, and desire to make it in the country music world. She has a mysterious past and a snarky personality—I liked her character—but overall, Run Rose Run was a disappointment.

Don’t take my word for it. Based on the plethora of five-star reviews (and best-selling rank), plenty of folks obviously love this collaboration between Parton and Patterson. To each his own, you know.

Favorite Quote: “Fate granted some people their wildest, greatest wishes while leaving the simplest pleas of others unanswered.” This complex story is layered with three central male characters who have been shaped by war and familial expectations. Robert Quinlan is a respected university professor and Vietnam vet, who is estranged from his brother, Jimmy, who avoided Vietnam by fleeing to Canada. Bob, a homeless man with his own demons, drifts into the story and crosses the paths of the brothers in a life-altering way.

Loss, sacrifice, guilt, changing relationships—there is much to unpack in Perfume River. But as is typical of Robert Olen Butler, he presents serious themes insightfully and without excess sentimentality. His flashbacks and shifts in perspective are so skillfully written, I re-read paragraphs simply to learn.

So far, my favorite of his books.

Favorite Quote: “He has already done whatever it is he has done.” In this story set in the 1950s, Margery Benson is fed up with her life as a spinster teacher. When she sets out on an adventure to New Caledonia in search of a rumored golden beetle, she enlists the help of Enid Pretty to be her assistant. The two ladies couldn’t be more different. Their personality differences—Margery is serious and awkward, and Enid is wacky and wild—is  charming and one reason I found the story to be so entertaining.

Yes, this madcap adventure requires suspension of disbelief, but sometimes I need that in a book. And there is more than meets the eye—deeper reasons behind the need to escape, life trauma and drama to keep it real.

I thoroughly enjoyed Miss Benson’s Beetle. I rooted for Margery and Enid through every zany chapter. And in the end, I was reminded that not only do we make a mark on the world, but the world makes a mark on us.

Favorite Quote: “She had travelled to the other side of the world, but the distance she’d covered inside herself was immeasurable.” Don’t Cry for Me is a love-letter from Jacob, who is dying of cancer, to his gay son, Isaac. They have been estranged for decades. The story is also a powerful attempt at truth-telling.

Jacob was raised in Arkansas by his grandparents during a different time. As Jacob writes his letter to Issac, he describes his childhood and his violent understanding of manhood. He understands and apologizes for his shortcomings as a father.

A important reminder that we are products of our environment. And that we must work to change.

Favorite Quote: “Now I see why you and your mother read so much. It makes you think, makes you see things you can’t see, and that was my problem. I had all kinds of opinions, but I couldn’t see a damn thing.” At the age of 67, Emma Rowena “Grandma” Gatewood became the first woman to walk the Appalachian Trail alone. She told her family she was going for a walk, and walk she did. She sewed a makeshift backpack from a yard of denim, packed Vienna sausages and bullion cubes, and left home wearing regular clothing and canvas Keds. After raising 11 children and suffering from an abusive husband for decades, walking the trail must have seemed like an idyllic escape when she first read about it in National Geographic.

As she walked, word spread, and she became somewhat of a celebrity. She was interviewed by newspapers and television shows; she gained a large following. Her vocal criticism of the trail upkeep—sections were unmarked, overgrown, burned, etc.—led to improvements and better maintenance, hence the idea she may have “saved” the trail.

Favorite Quote: “After the hard life I’ve lived, this trail isn’t so bad.” 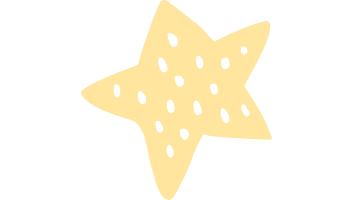 I hope you add a few of these books to your to-read stack. Summer is coming, and that’s the best time to get lost in a good book.

What are you reading?