As we float into June, I think about the year we’ve had so far. And I worry about friends and family and folks I don’t know affected by floodwaters in Arkansas and Oklahoma. And farmers who can’t get crops in. Let’s hope and pray for a calm, productive June, shall we?

I’m happy to report we survived the Garden Tour yesterday. I am absolutely exhausted to the middle of my bone marrow. I plan to recap everything in a future blog post, but for now I’ll blame the Garden Tour for anything that may sound nonsensical in this letter. ☺

Just before Memorial Day weekend, a cardinal began to build her nest in our viburnum just outside the kitchen window. This is the third year in a row she has made her nest in these bushes. We literally have a window into her world. And I love that most about our kitchen. She doesn’t seem to care that I watch her as she works.

She rimmed the very edge of her nest with a twig of rosemary. How cool is that? I imagine she has the best smelling home in the treetops. So diligent she was as she flew away toward the “Back Forty” and came back each time with another beak filled with twigs.

Back from the lake, I noticed her nest looked to be completed. But I didn’t see her until the next morning. There she was sitting patiently in the home she had built, watching me unload the dishwasher and my brew coffee, probably wondering what strange things I do inside my nest.

See the tip of her red beak? Yesterday she sat in her nest all day while hundreds of people strolled through our backyard, oblivious to her. I’m sure she wondered what was going on in her normally peaceful world.

I’d like to thank The Book Club in Fayetteville for a wonderful evening! I’ve been invited to so many book clubs—around forty-five I think!—and each one is unique, fun, engaging. The truth is I’m a book club junkie. I want to join all of them.

This one was no exception. In fact, I’m planning to attend next month’s meeting (as a reader), and I’m already reading the book (Less by Andrew Sean Greer).

What a fun group. The conversation, the food—everything was fabulous. You may have already heard about the baby deer my sister and I found one morning while walking in the woods at the lake because I posted pictures on Facebook and tweeted about her. But look how cute! Actually the fawn found us. She came wobbling through the brush and down the hill onto the trail, all tiny legs and knobby knees, running right up to us as though surprised to be there, alive in this world, happy to find two other beings (strange as we looked).

She was precious, inquisitive, friendly—the true definition of doe-eyed. I thought of the Dr. Seuss book Are You My Mother?

First, she stopped to ask me. Then Staci. I believe we could have scooped her up into our arms and carried her back to our cabin. But I knew (hoped) her Momma would return. Plus, I had visions of her future self eating my hostas…

She nuzzled beneath branches and bedded down next to a tree, instantly blending into her Ozark habitat so well I’m not sure we would have noticed the tiny creature had she already been there when we walked by. Later, we heard (via a wildlife officer) that after a mother drops the fawn, she disappears for 24 hours. Although the fawn is born scent-less, this is a protective instinct to keep predators away. She returns when the fawn is hungry.

So I’m assuming by now the mother and baby have been reunited. And I feel honored she greeted us at all.

It seems I can’t keep a coffee pot. In the 4.5 years we’ve lived here, three (maybe four) coffee pots have quit on me. Really, nothing I did or didn’t do led to their demise as far as I know. They just broke. I swear.

I had an old-fashioned percolator. It was my favorite. Coffee perking? That’s a great morning sound. But the lid broke, rendering it unusable.

I had a Keurig, too. I have to admit I wasn’t too sad when it stopped working. I hated buying those k-cups and wish I’d never added them to the landfill.

On Thursday, my Mr. Coffee said goodbye as he brewed his last half pot and promptly began smoking from every crevice, the smell of burned plastic filling my kitchen.

Seriously? How can I be expected to write anything without coffee??? 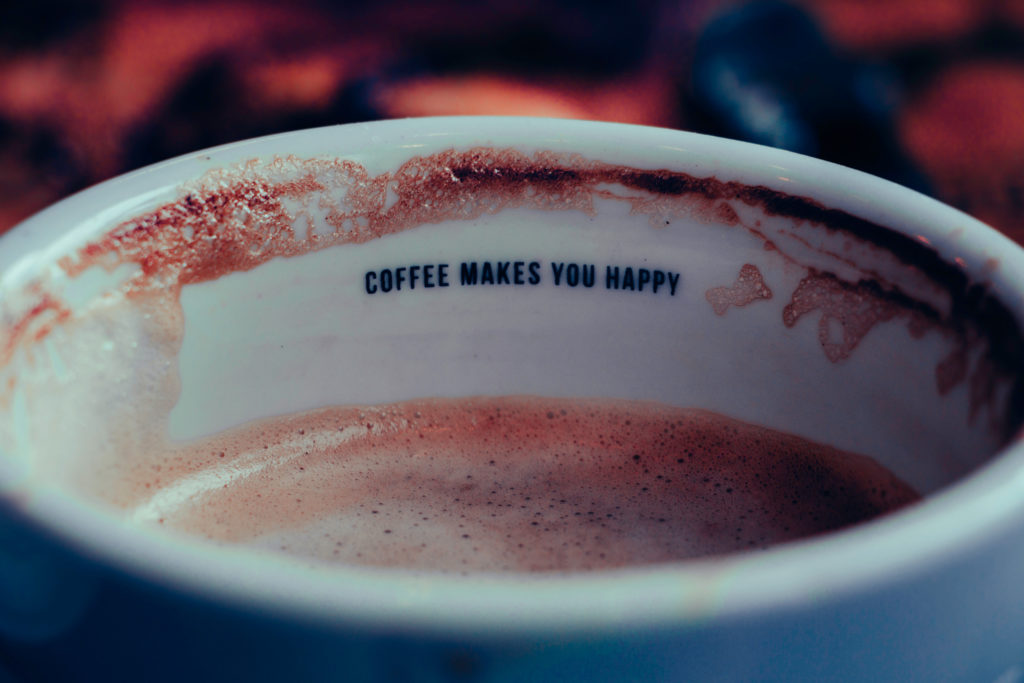 I’m searching for recommendations. What ya got?

I can’t drive the boat left-handed. I have to keep that hand free for food. Chips and stuff.