Anyway, to be better stewards of our tiny piece of land, we recently set out to contain our heavenly bamboo. Yes, this is an otherworldly endeavor. When people find out what we’re doing, they laugh. Roll their eyes. Mutter, “Oh, good luck with that.” Everyone LOVES to share their own bamboo horror stories. Some even flat out say, that’ll never work.

(It’s like childbirth in reverse. Remember how everyone loved to share their episiotomy stories right before you nearly burst with your own eight pounder?)

We are determined. We sort of like our bamboo and don’t want to remove it entirely. Instead, we are giving our heavenly bamboo its own island.

In case you have a similar heavenly bamboo situation, I thought I’d explain the process we’ve undertaken.

John hand dug this impressive trench. It needs to be two feet deep to accommodate the Bamboo Shield. He worked hours and hours on this. For a while, our bamboo was surrounded by a moat. This is a two person job. The material (60 MiL thick x 24 inch) is heavy and awkward to maneuver. It must be placed at a slight angle away from the bamboo. The idea is that when a root comes in contact with the shield, it will curl backward and grow in the direction it came. 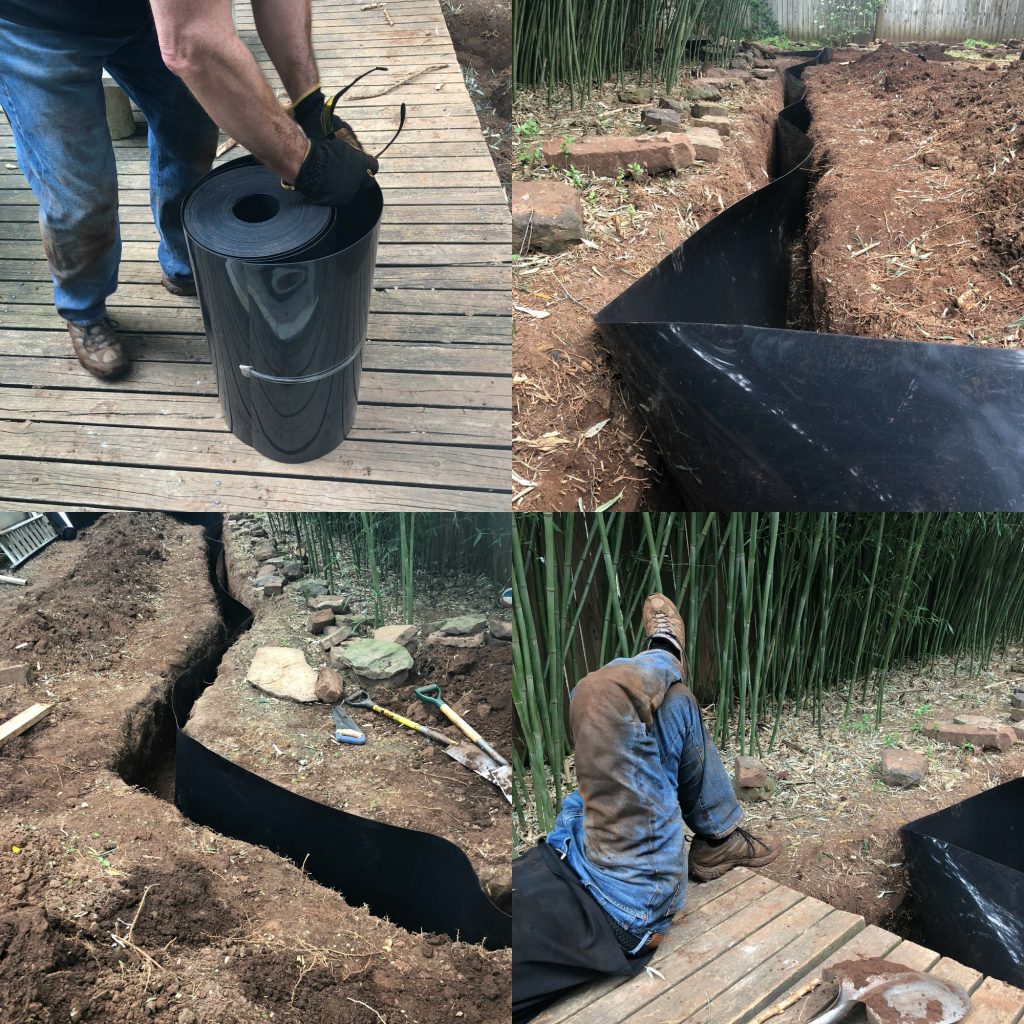 Cover with soil leaving a two inch Bamboo Shield lip above the ground. Once we add stones and mulch, this won’t be visible. 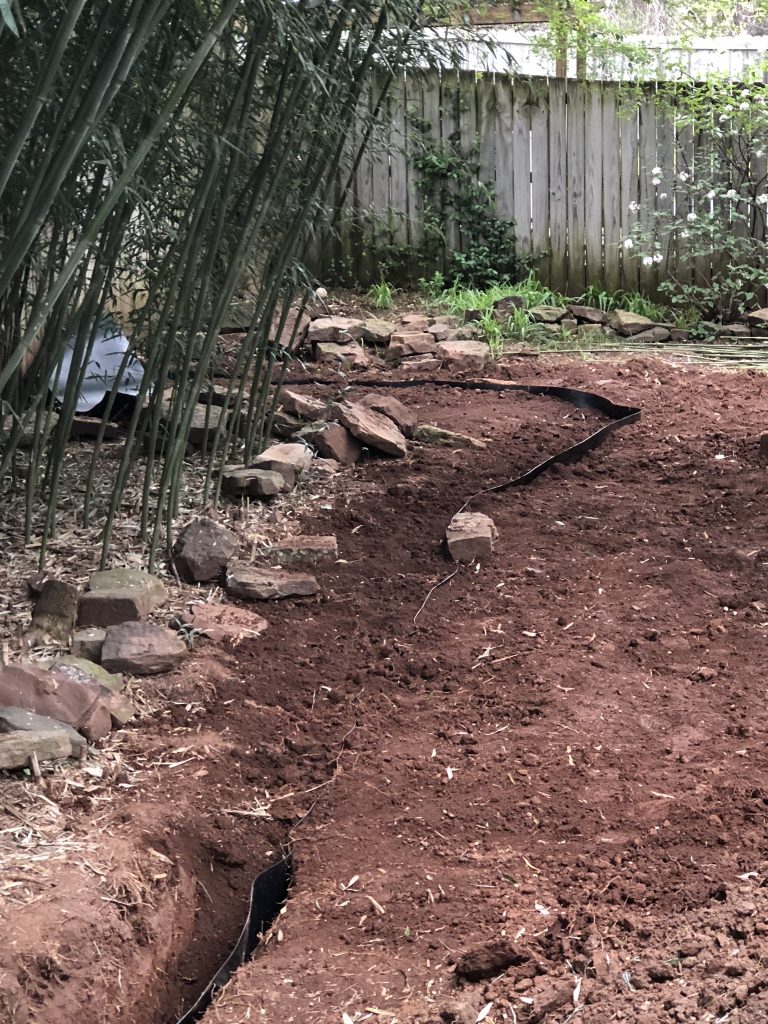 What can it hurt?

If you have bamboo and are interested in learning more, visit www.bambooshield.com. It’s a helpful site. (Not an ad.)

You’ve heard that bamboo shoots were used as a method of torture against prisoners of war? After tying a prisoner down over a young bamboo shoot, the bamboo would quickly grow, piercing the skin and growing through the body to the other side. I believe it.

This stuff is tough. During spring you can practically watch it grow! Some varieties grow three feet a day.

The new shoots are like some sort of Jurassic claw. 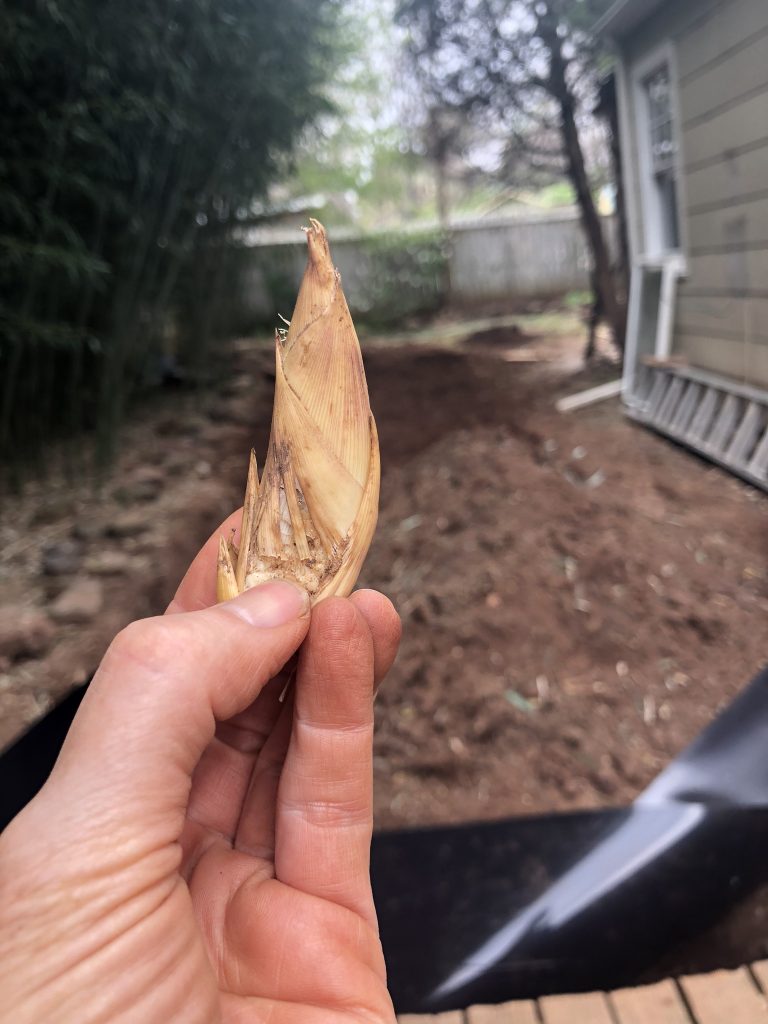 Yeah, I know. Life finds a way. But if our heavenly bamboo will simply stay on its new island, we will all get along peachy.