On the day after Christmas, Lucy and Annabelle went for a walk around Klyde Warren Park. John and I went, too, along with half of the city of Dallas. Apparently lots of people in north Texas shared our game plan—to get out, enjoy the day, and step away from the leftovers. And no one was wearing those heavy sweaters and scarves Santa brought for Christmas. Folks dressed in shorts and threw footballs or lounged on blankets while barefoot kids splashed in the fountain. Although the weather felt more like the first day of spring break, there were plenty of gorgeous decorations to remind us of the season. Lest we forget.

Enjoy it while we can, I say, because it won’t last. Winter WILL eventually have his way. 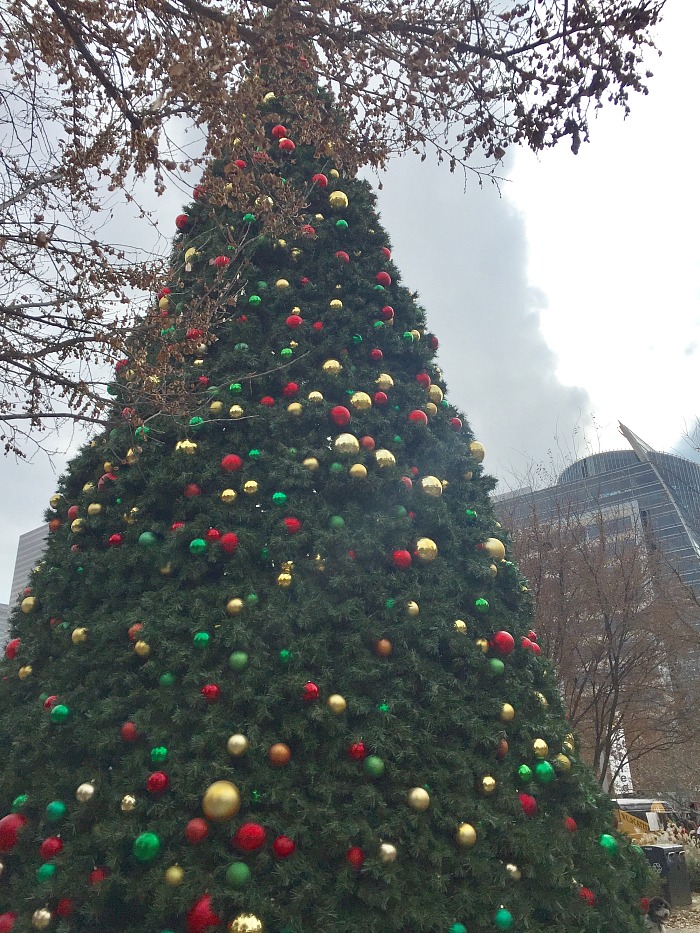 If you find yourself in North Texas, I highly recommend you get on over to Klyde Warren Park. This 5.2 acre park is built over recessed Woodall Rogers Freeway. And let me just say this—building a deck park ABOVE an eight-lane interstate is an engineering and design feat that makes me believe someday we could in fact live on another planet or at least survive the next few years. ?

You need to see it to believe it.

Construction began in October 2009, and the park opened in October 2012. Since I lived and worked nearby, I watched it happen. Award-winning landscape architect Jim Burnett designed the sustainable green space landscape which includes 37 native plant species and 322 trees (not that I counted them, I snagged this info from the park website).

But think about it. Three hundred and twenty-two trees now grow in what was once thin air.

Not that long ago, Woodall Rogers Freeway divided downtown and Uptown into two distinct areas, and to get from one to the other, well, you drove or took a bus. Or didn’t go.

…you walk through the park with your dogs or push your baby in a stroller. It’s all very hip and civilized.

Today, Klyde Warren Park connects Downtown and the Arts District to Uptown. To say the park has been instrumental in the ongoing Dallas renaissance would be an understatement. This project has been the catalyst for an incredible amount of  additional nearby construction, obvious by the cranes flying high all around the Dallas skyline.

Dallas did something right. Lucy and Annabelle thoroughly enjoyed themselves while getting much needed exercise. Food trucks enticed them with lots of smells. People provided lots of “oooh, look at the cute schnauzers” comments. Other dogs entertained them with social time. Overall, it was great down time during the busyness of Christmas.

Klyde Warren is an interactive space offering so many things to do including live music, a children’s park and a dog park, yoga, chess, croquet, educational classes, a putting green, and more. My favorite thing is the “Reading Room” space that includes rolling bookshelves and magazine racks available (thanks to the Dallas Public Library and the University of North Texas). There’s a cart filled with games, too. Grab a table and enjoy a good read. How cool is that?

In 2012, oil pipeline mogul, Kelcy Warren, donated undisclosed millions to the development and construction of this park. In exchange, he was given naming rights. He named the park after his son Klyde (who was nine at the time). Warren requires his son work as an intern at the park each summer until he turns 21. This incredible donation doesn’t appear to be a “hey look at our family, we’re filthy rich,” thing but was more a “to those whom much has been given, much is required” thing.

Something I happen to believe in.

This park is making a huge impact in Dallas and in the lives of those who visit. If I had undisclosed millions laying around, I’d do something impactful and name it after my kids. Or Lucy and Annabelle. What are you doing during this holiday season to enjoy some down time? I’d love to hear from you in the comments below or on social media!

P.S. for more of Lucy & Annabelle’s many adventures in Arkansas and Texas, click HERE.