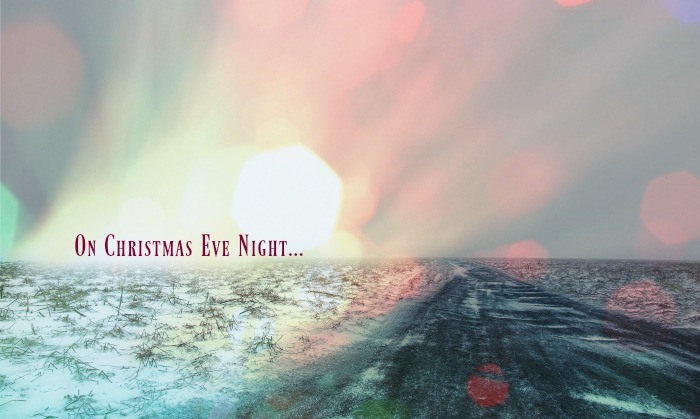 It was a short drive we’d made hundreds of times before, yet on Christmas Eve night of my seventh year, the gravel road felt different beneath the car. From my spot in the backseat, I gazed at the glittery night. Snow-covered fields stretched beneath a moon so full it nearly swallowed the land. Momma turned up the radio when Bing Crosby dreamed of a white Christmas and for once, for us, a white Christmas would be real.

And I wondered if every seventh Christmas brought snow.

Nana and Papa’s farmhouse glowed in the distance, the square windows watching for us, growing brighter as Daddy drove closer. As we turned into the drive, Nana’s Christmas tree illuminated the living room window. Redbluegreenyellow lights danced off bushes bowing under wet snow, bushes that would later hide behind June iris.

Inside, the house smelled of evergreen and melted butter and tangerines. The grownups stood around laughing and drinking coffee from red cups, but I sat with my little sister on the floor in front of the tree, staring at the tree, studying snowflakes hanging from the branches, not real snowflakes, but ornaments Nana had crocheted throughout the year when she’d had idle time. Somewhere under the Christmas tree decorated with redbluegreenyellow lights inside that farmhouse under those stars on a snowy Christmas Eve, a gift waited for me.

And I wondered which one. But I didn’t snoop, not much, because Momma said it wasn’t time yet.

Later, after eating my fill of turkey and dressing and creamed potatoes, I found it, my gift, the one with my name written in Nana’s perfect handwriting on a card she’d made from scrap paper. And I sat on the couch and balanced it in my lap and tried to guess what might be inside. And I imagined Nana buying the red Santa paper at Sterling’s only days before and wrapping it while sitting at the same dining room table where Momma and Daddy and Nana and Papa and Uncle Rex and Aunt Frances ate pie and more pie and so much pie they would later moan, while I waitedwaitedwaited to open my present.

And I wondered where Santa Claus was at that exact moment.

Later, Nana and Papa would move to town.

Their new house would be built of red brick and filled with most of the same furniture and all the same people, only Nana would wear a tired expression and a nightgown during the day because she’d been in and out of the hospital so many times I stopped counting. The new dining room occupied only a nook that opened to a red brick patio, rarely used because the table blocked the doors. Daddy carved the turkey with his elbows drawn tight against his side because it was crowded, that dining room nook. Papa bought a fake tree that smelled plastic instead of evergreen. It snapped  together in sections and twinkled with bright white lights instead of redbluegreenyellow, but the ornaments were the same. Even Nana’s crocheted snowflakes which hung from loops of white thread.

Later, Nana would be gone.

Later, we would open presents and take a family picture with Papa, my sister and me, wedged beside him on the chair, those same ornaments on his perfectly shaped tree, the tree we’d decorate for him. The same heaping casseroles would fill Nana’s platters on the table. The same peppermints would fill her candy dish. Same yet completely different. And when Bing Crosby sang, I’d wonder if we’d ever have another white Christmas.

Still much later, I would hang Nana’s crocheted snowflakes on my own tree in my own house under those same stars that would never look quite the same again. 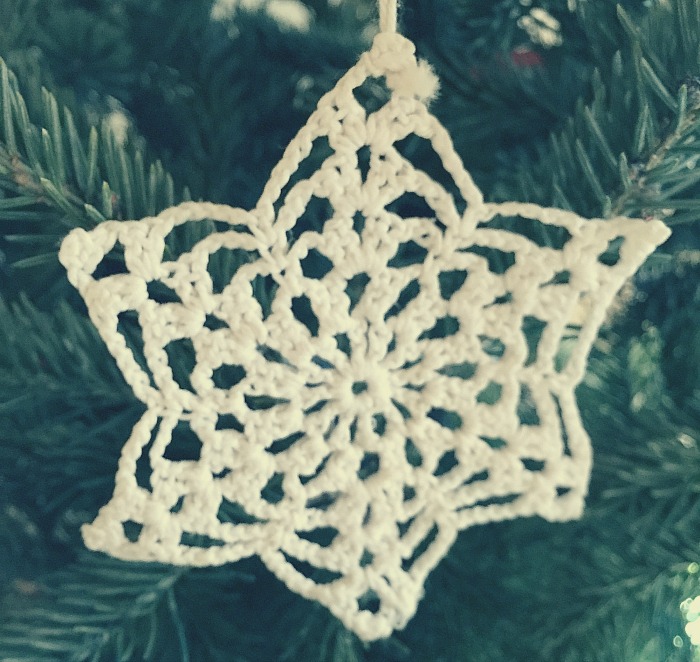