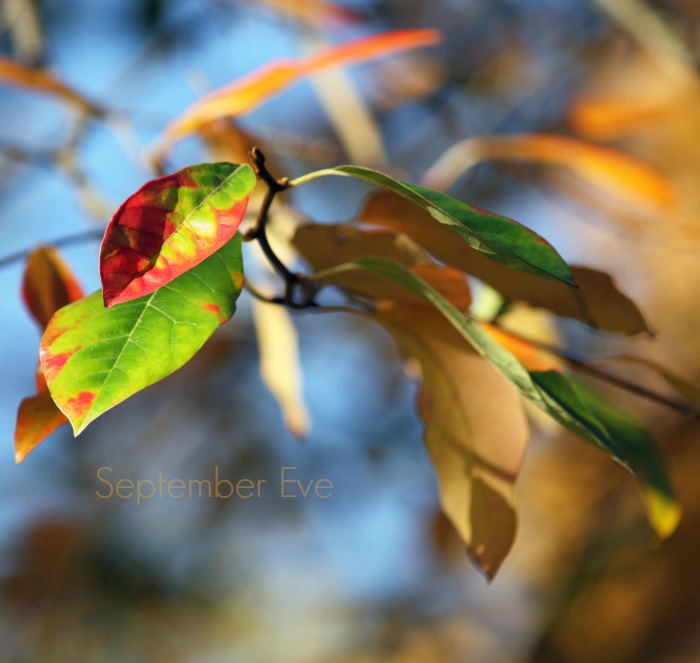 Happy September Eve, everyone! I’m always happy to see August come to an end. Are you? Even though we’ll no doubt have more hot, humid days, there’s just something about flipping the calendar to September that makes me wanna dance. I also feel a little melancholy about the things I never got around to doing. That summer bucket list I wrote? Yeah, I didn’t tick off everything, but I suppose technically I still have time to do a few more things.

Do I dare do a fall bucket list?
Of course.
But not yet.
Maybe when fall officially rolls around. Right now, I’m living in those in-between days still savoring the things I love about summer (like nectarines and walking barefoot) yet looking for fall in the dogwood leaves already tinged with orange.

Rice harvest has started in the Arkansas delta, and that’s a beautiful thing with dust flying and combines cutting in staggered lines.  For most of the farmers I know, this summer has been an unusually tough one with spells of too much rain followed by excessive heat, followed by more spells of too much rain. I bet they’ll be glad to close the books on the summer of 2016. Am I right, farmers??? For me, being a non-farmer and all, my summer was stellar with lots of book marketing travel all throughout the South. And a family vacation to Lake Norfork. And a trip to NYC with my sister and niece. Hard to top seeing Hamilton on Broadway!!!

The gardener side of me hasn’t been too pleased with my pepper plant (yes, singular). So far, a critter I’ve yet to identify has eaten every pepper before I’ve had a chance to pick even one.

The most exciting thing happening in my world right now is that I’m almost (knock on wood) finished with the roughest of rough drafts for my second novel. For those of you waiting on a Gracie Lee sequel, I hate to disappoint, but this isn’t it. This is something altogether different. Something I began writing before I wrote word one of The Accidental Salvation of Gracie Lee. I’m completely consumed with this project, so much so that coming up for air to write this post took effort.

So cheers to September Eve, to the end of summer and the beginning of fall, to harvest, to being high on writing new words, to sneaky garden critters who gotta eat too.

[tweetthis]Cheers to #September Eve and all it brings! [/tweetthis]