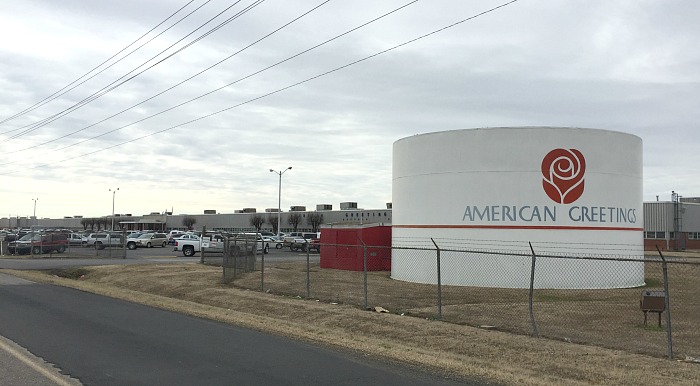 All my life, American Greetings has been a magical mystery to me. A rather serious looking building, it spreads low on the flat delta landscape even wrapping around its own private lake. And although located only a few miles from where I grew up, I’d never stepped foot inside. Until a few weeks ago.

Being a writer sometimes has its perks. At long last, I wormed my way inside and confirmed lots of things I’d always heard like employees really do ride bicycles inside. And they buzz around in golf cart-type vehicles, too. Internal transportation is a necessary thing because the plant occupies nearly 2.6 million square feet, or 60 acres.

60 acres is the equivalent of 54 football fields, and that’s a big chunk of real estate. 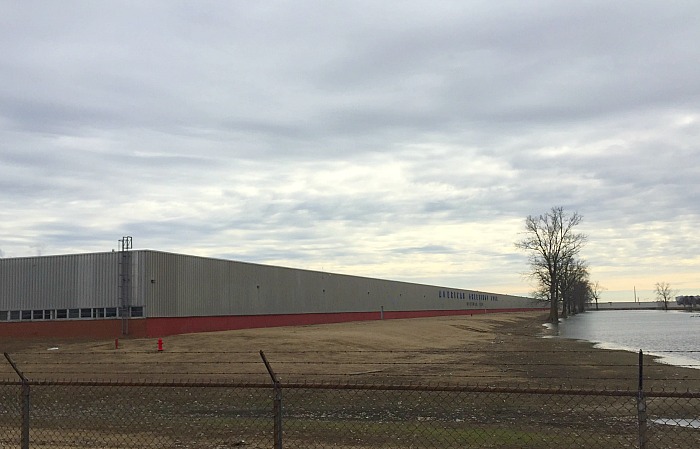 For a couple of hours, I held my very own golden ticket and enjoyed a personal look inside the Willy Wonka of greeting card factories. And take it from someone who becomes excited over paper products and buys lots of cards, the tour exceeded my expectations even without a chocolate river. 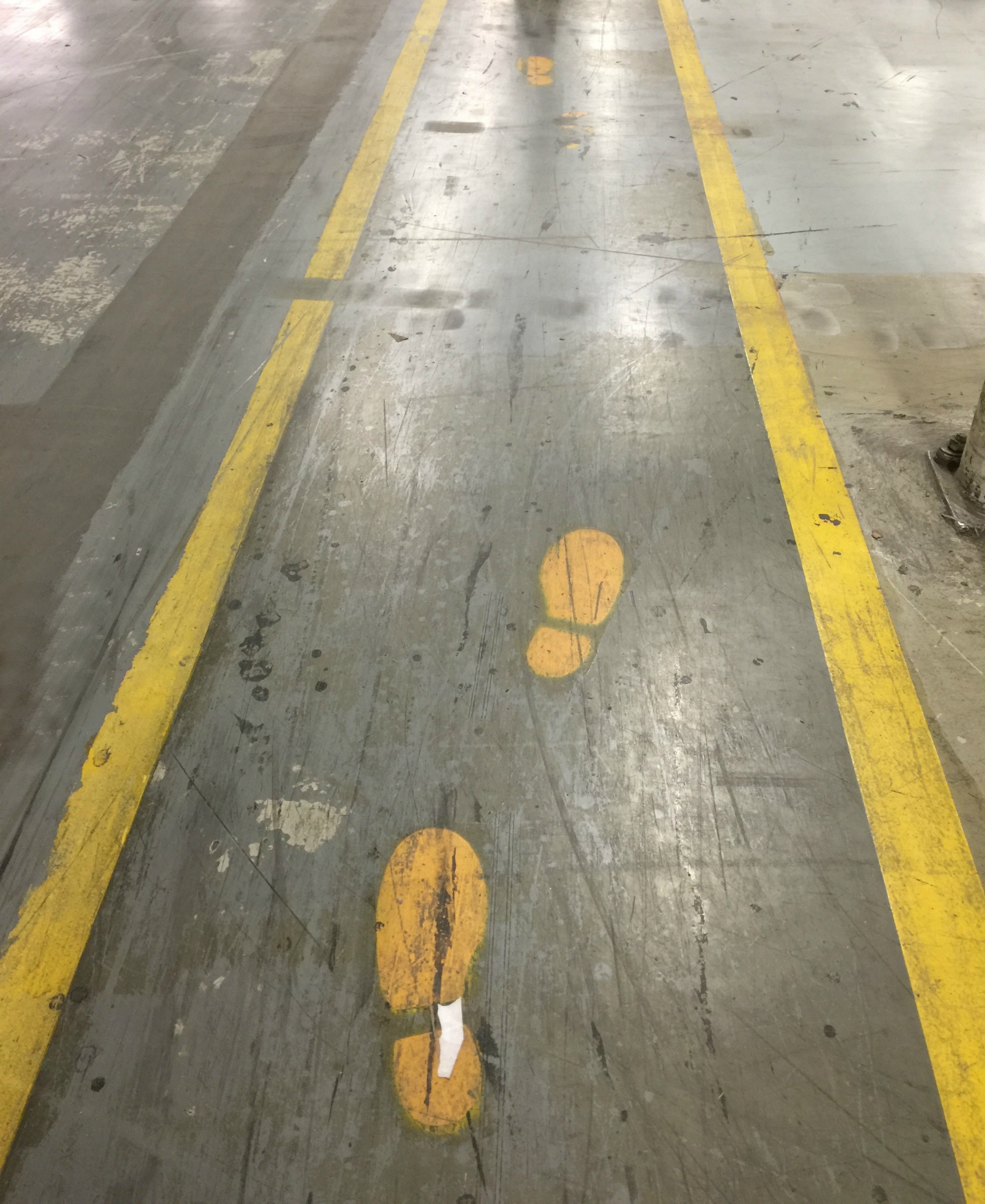 Each massive machine operates as its own city, managed by an employee more than willing to show off his or her particular part of the overall production—cutting, stamping, dyeing, sprinkling glitter on cards. Yes, there’s a machine that sprinkles and bakes on glitter. Glitter makes me happy. 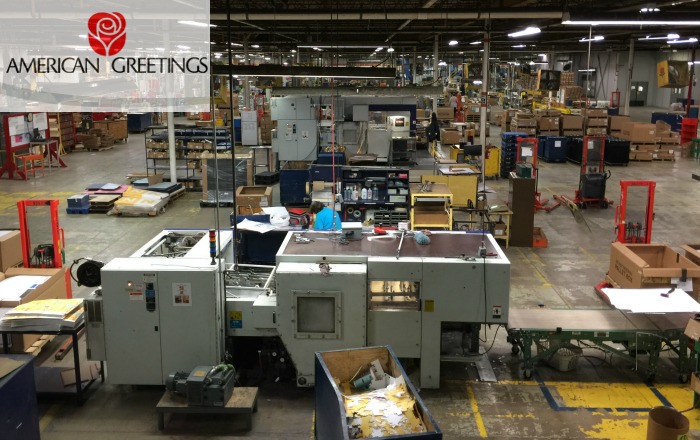 What begins as enormous white rolls of paper, the size of round cotton bales, efficiently morphs into boxes of Mother’s Day cards and next year’s Christmas greetings. And just like Willy Wonka’s concern with chocolate espionage, there were certain areas of the American Greetings factory I couldn’t photograph because of trademarks and other such high level coolness.

I’m not going to tell you there was a secret Inventing Room like in the Chocolate Factory, but there could have been. 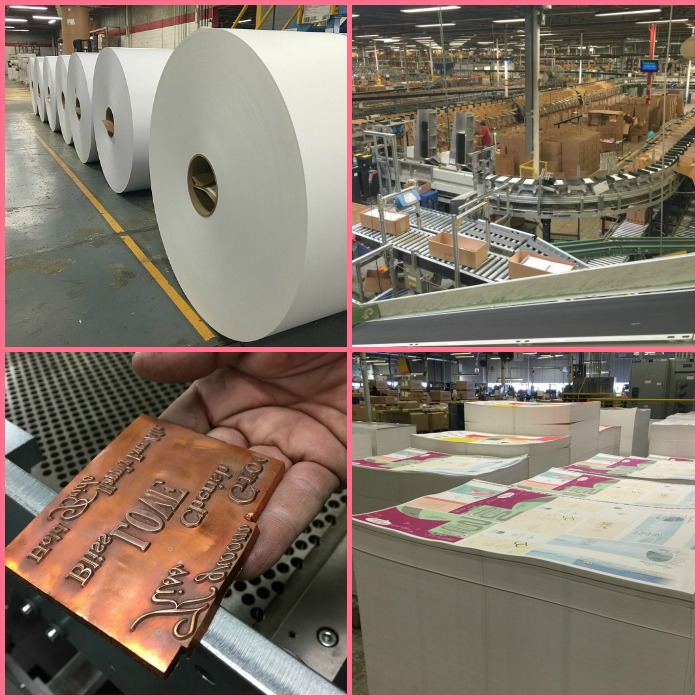 The story of American Greetings Corporation includes all the elements of the classic American dream. In 1906, Jacob Sapirstein, a young Polish immigrant, moved to Cleveland, Ohio with nothing but imagination and determination. He secured a $50 bank loan, started a business selling penny postcards to local merchants, and within one week, paid off his loan.

Sapirstein Greeting Card Company quickly grew into a profitable family business that survived during the The Great Influenza when Sapirstein became ill, and even flourished during The Great Depression when folks bought greeting cards in lieu of gifts. Later after World War II, as people became more mobile, greetings cards became the most popular way for staying in touch with loved ones.

The Osceola factory opened in 1961 primarily as an order filling facility. Northeast Arkansas provided a prime location with convenient river, rail and trucking transport. Over time, the facility has expanded and grown to handle both manufacturing and distribution. At one time it was the largest manufacturing facility under one roof in Arkansas. Ten miles of conveyer belts run through the factory. 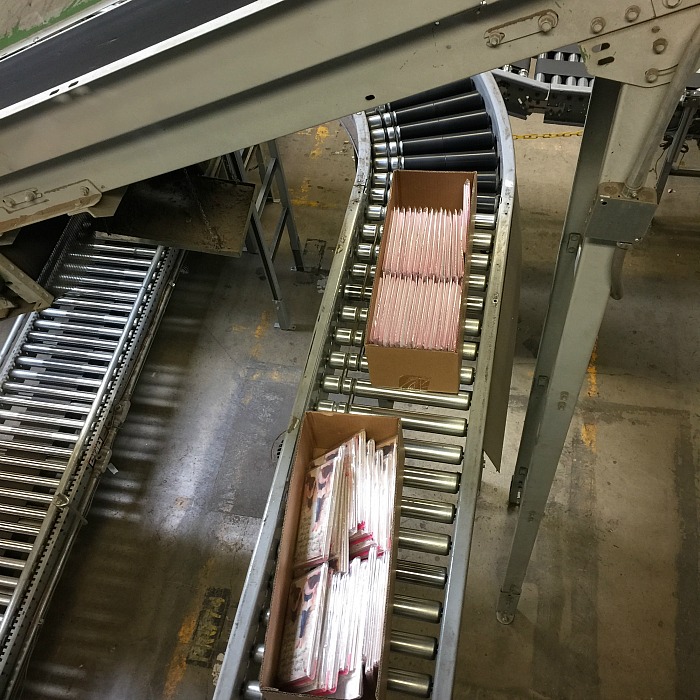 Whether you realize it or not, most of us grew up with American Greetings. Remember Holly Hobbie?

The Holly Hobbie card debuted during the tumultuous 60s providing us with a “nostalgic sweetheart” and a throwback to a more peaceful time. We met Strawberry Shortcake in the 1970s. By 1981, this spunky character had generated $500 million in retail sales with 600 different Strawberry Shortcake products. Miss Shortcake was followed by the Care Bare sensation. (While I was there, I suggested a Gracie Lee line of cards. Seems so logical to me.)

In 1986, at the age of 101, founder Jacob Sapirstein saw his company reach a $1 billion total sales milestone. And the company has continued to grow, expand, and evolve with a huge global and cyberspace presence. Today, American Greetings has the largest collection of electronic greetings on the Web available at AmericanGreetings.com. 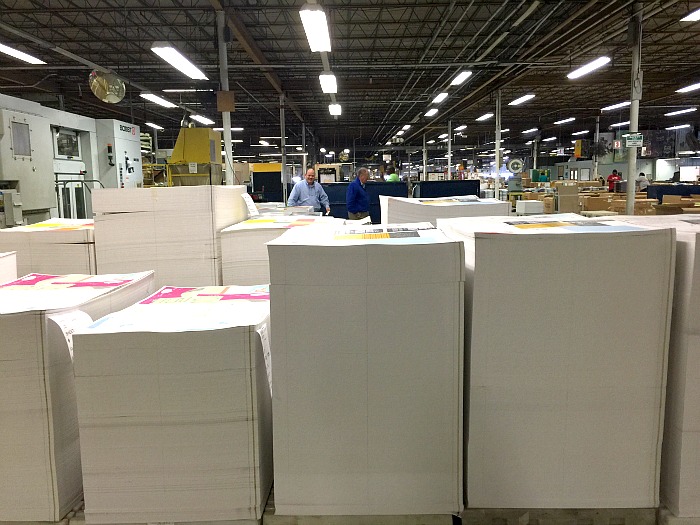 During my tour of the Osceola facility, I had a flashback to my banking career. One of the things I loved most about being a loan officer was visiting my manufacturing customers—companies that make things we can see and use, and that employ the area citizens—that’s what keeps this country moving forward.

American Greetings in Osceola employs 1,331 associates. Many are second generation employees. And the level of dedication was noticeable from the friendliness of the employees to the number of employees with longevity and perfect attendance records. Thirty-one associates have over 10+ years of perfect attendance.

Larry Caldwell (pictured below) is the associate with the most seniority. Other than working in the cotton fields while in high school (he graduated from Missco), Larry’s entire working career and a significant portion of his life has been spent at American Greetings. 51 years to be exact. He started on the docks in receiving, moving goods from the boxcars that brought in inventory. That was the hardest job, according to Larry. During his tenure, he’s worked every shift in various departments. Now Larry works 1st shift in the engraving department. Larry said the great people make his job easy, and today’s computers and technologies make him feel guilty for even drawing a paycheck.

If you’ve received an American Greeting card within the past few years, odds are good that Larry touched it. And after having met him, I think that makes it even more special. 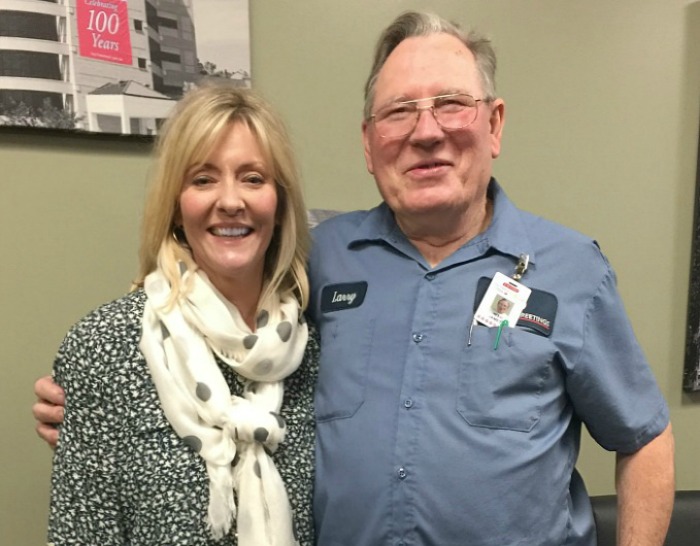 The company’s major greeting card brands are American Greetings, Carlton Cards, Gibson, Recycled Paper Greetings, and Papyrus. Look for these brands the next time you buy a card and remember there’s a great chance it was manufactured and/or shipped from Osceola, Arkansas. How cool is that?

Thanks to everyone who made my tour so much fun! Even without a single piece of chocolate. 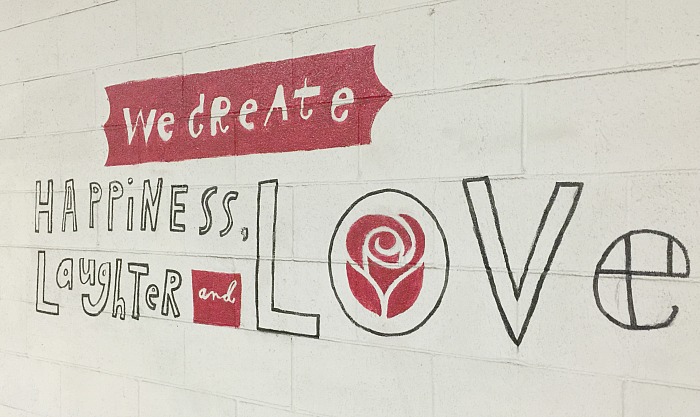