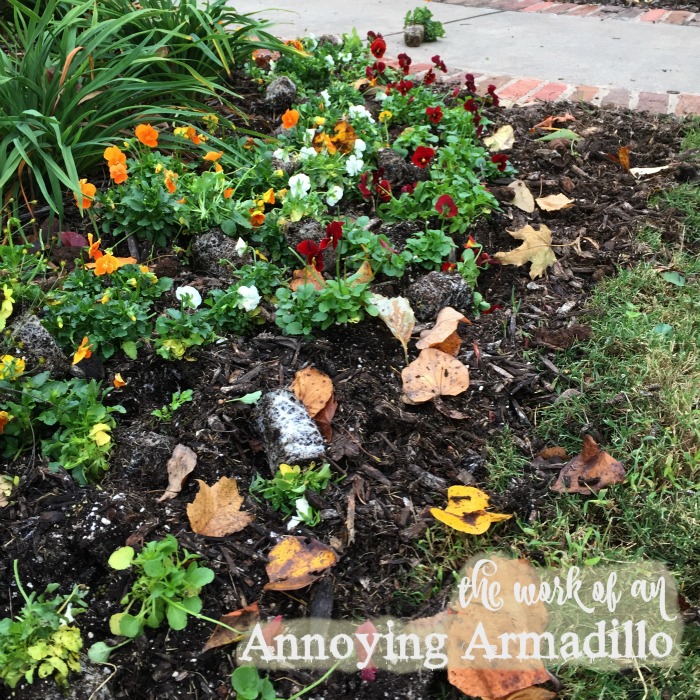 Each morning, I had to replant a few pansies here and there. At first, I blamed the squirrels, but as the problem grew worse, I began to suspect a different critter. Sunday morning I awoke to a freshly tilled flower bed and a tunnel under my porch. There’s an armadillo in my garden(!), and the nasty thing dug up most every flower. If you look closely at the picture above, you can see all the plants tossed around and NOT in the ground. So stinkin’ rude this digging, rooting, garden-wrecking creature.

I know he’s gotta eat, and his food of choice is grubs. So apparently I have grubs. Or maybe I only have one grub and he’s bound and determined to find it. Or maybe he’s digging to China where there’s a sale on grubs?

Only one way to take care of a problem like this.

Never once in all my years of living in Texas did I see an armadillo in my yard. Look at this poor little beheaded pansy! I declared war on this armor-plated varmint. 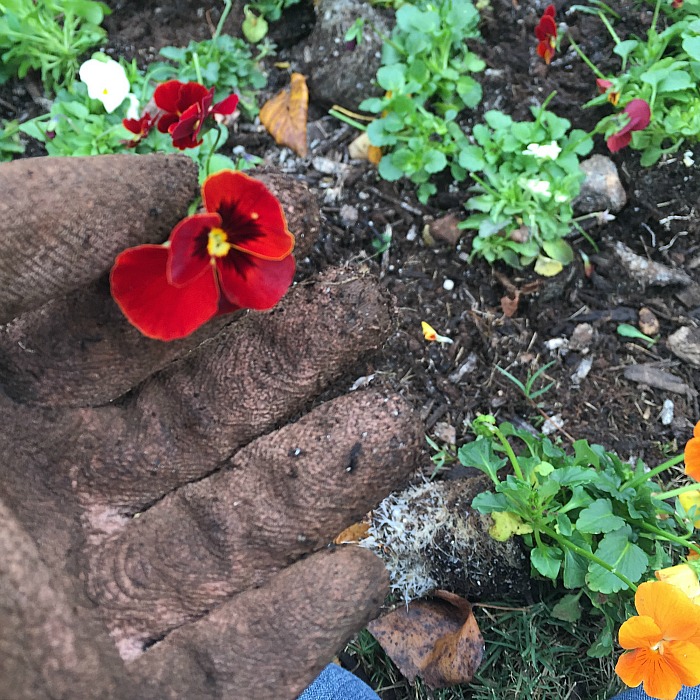 According to my Facebook followers, advice ranged from don’t handle it (it carries leprosy) to grab it by the tail (a joke?). The overwhelming advice was to blast it to Kingdom Come with a shotgun. Well, I don’t have a gun (unless you’re planning to rob me in the night and then, yes, beware, I have a deer rifle under my bed). No, really.

After consulting other gardeners in the know and reading everything I could, I developed a two-stage, five pronged plan of attack.

1. I sprinkled cayenne pepper all through my pansies. At the very least, the squirrels might stay away for a day or two and they do wreak their on kind of havoc everywhere.

2. I mixed up a batch of Mosquito Barrier and applied a heavy coat all throughout my front beds and around the porch. Mosquito Barrier is basically garlic juice. It’s a great natural solution for mosquitoes, and since armadillos have sensitive noses, I hoped it would drive away my rude houseguest. 3. I sprinkled a border of Repels-All (biodegradable) around my flowerbed, porch, everywhere. This, too, smells like garlic.

4. I left the porch light on all night. It’s glaringly bright and since Mr. Armadillo is nocturnal, I hoped it would confuse him.

Monday morning, I found no new evidence of him. My pansies looked bone tired from four days of armadillo abuse, but they survived an entire night without being uprooted again. Bless them.

Stage II. Now to treat the underlying problem. (There’s a not so funny pun here.)

5. I bought the strongest (only) grub bait I could find at Westwood Gardens. While I normally try to go the natural, organic, tree-hugger route with my garden, I’m not pussyfooting around with this problem. I’m going with Barney Fife’s advice on handling troublemakers… NIP IT!

My front yard smells all garlicky like a Caesar salad. It’s been three days and so far (knock on wood), I’ve seen no sign of Mr. Armadillo.  I haven’t had any trouble with mosquitoes or vampires either.

[tweetthis]#Armadillo in your garden? Go the #BarneyFife route and nip it in the bud! My 5 pronged attack #gardensolutions [/tweetthis]