♫ one of these things is not like the other♫♪

Sometimes a garden isn’t all pink flowers and sweet smells. Sometimes an odd thing (like slime mold) takes up residence, and it’s up to you, the head gardener, to get to the bottom of it. Here’s how it happens. While enjoying your morning coffee (freshly ground beans from Arsaga’s with just a touch of milk) and admiring all the new blooms since yesterday, you happen upon a whole colony of strangeness lurking in the mulch. Did a gigantic wolfhound vomit in your yard, because your small schnauzers could never barf up that much of anything.

A few days ago, you thought you saw a mushroom in that exact location. But now the “mushroom” has multiplied and slithered across the ground like The Blob. What a fascinating / nasty thing.

As you might expect by now, this is a true story. Insert dramatic music…

I turned to Dr. Google who said I have a slime mold, also known as dog vomit slime. For real. Mine (see how I’m stepping right up and owning it?) was whiteish and sort of reminded me of meringue or a funnel cake gone way bad. You know how funnel cake dough is all loopy and strung out on the paper plate? Sorry for the food references…

Here’s more slime in a different area of the bed. Yeah, I have lots of it. 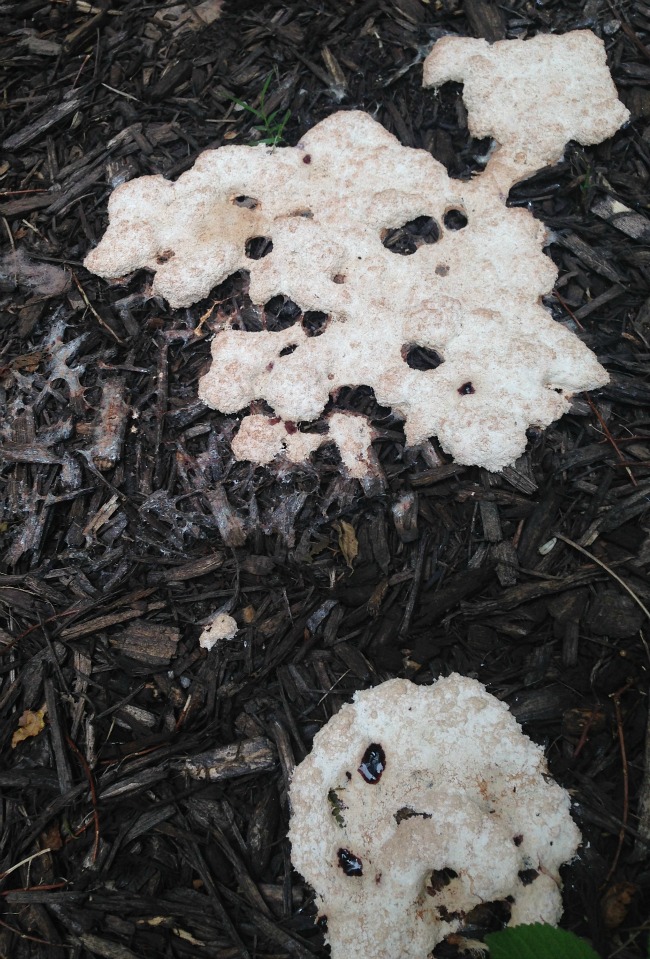 Scientist-types get excited over this sort of thing because there’s a whole ecosystem living and growing right here. In my opinion, this wasn’t nearly as cute as when Horton heard a Who on that speck of dust. But still, I was curious to know more. When I was in seventh grade science class, there were only five kingdoms of life. Later a sixth one was added (and some argue there is now a seventh.) Do you remember them? Me neither. They are: Archaebacteria, Eubacteria, Plantae, Animalia, Protist, and Fungi. Although I thought I was dealing with Fungi, slime mold belongs to the Protist family. According to PBS, slime mold is a soil-dwelling amoeba, a brainless, single-celled organism, often containing multiple nuclei. Now, I’m clearly no scientist, and I’m sure there are a bazillion differences in these two classifications, but the thing that interests me most is that fungi “absorb” food while protist “feed”. (Think=monster.) 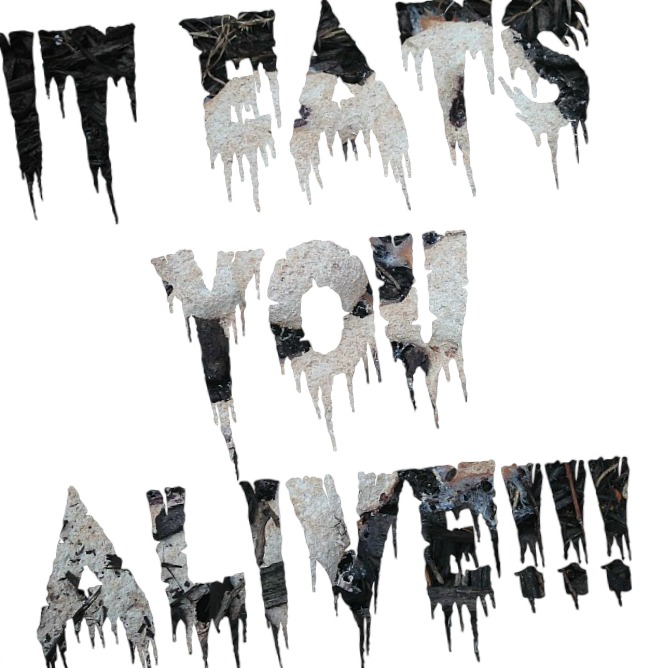 Although slime mold is unsightly*, it’s harmless. It grows in damp conditions and preys on decaying matter. There’s no need to remove it, but who wants to look at that? Plus, it’s a matter of time before my dogs roll around in it.

Or drag it in the house.

I promptly scooped it into a sack and very carefully (to keep the spores from scattering) placed it in my garbage where it is, no doubt, growing this very second and will smother our house tonight while I sleep.

The moral of this gardening story…sometimes a little mold may grow. It’s part of the deal.

Check out this slime mold time lapse! Creepy yet cool.