(My recent trip to Petit Jean Mountain was sponsored by Winthrop Rockefeller Institute which provided food and lodging. As always, opinions are my own.) Riddle me this. How can it be that I have made fifty-two trips around the sun yet NEVER managed to drive to Petit Jean Mountain? Yes, this oversight has been corrected. Finally.

Petit Jean, where have you been all my life?

Just South of I-40 near Morrillton—only 4 hours from where you grew up.

For shame. What took so long? Petit Jean Mountain is paradise above the banks of the Arkansas River, as stunning as anything I’ve ever seen. The mountain and Arkansas’ first state park encompasses over 2,600 acres of natural, unspoiled, pristine forest, streams and geological formations—a clear reminder that Someone else is in charge.

Oh how I love geology. The roar of Cedar Falls can be heard from the parking lot. I was completely awed and unprepared for such beauty. Last of the Mohicans beauty, for real.  Rock shelters, once dwellings for Native Americans, can be found among the bluffs. Evidence of their existence remains in the form of pictographs painted on cave walls. In the thirties, the Civilian Conservation Corps built Mather Lodge (the only Arkansas CCC-built lodge), pavilions, several cabins and bridges within the rugged landscape of Petit Jean Mountain. What an incredible place to spend time with your family hiking, camping (you can rent a yurt!), fishing, swimming, thinking, talking, or just being. “Just being” can often be a great thing.

For reservations and other information on the lodge and cabins, click HERE.) This stunning area of Arkansas, originally discovered 300+ years ago by French explorers, even comes with its own love story. When Adrienne Dumont, a young Parisian, couldn’t bear the thought of being separated from her love, French explorer Chavet, she disguised herself as a cabin boy and signed on for the New World voyage. Her true identify was discovered months later when she became severely ill. Nicknamed Petit Jean (French for Little John), she died on the mountain and was buried on the bluff where she spent her final days. This legend is thought to bring enchantment to the mountain. So was Winthrop Rockefeller.

In the 1950s, Winthrop Rockefeller, (grandson of John D. Rockefeller), fell under the spell of Petit Jean Mountain during a visit with his WWII buddy who lived in Little Rock. He bought a large portion of the mountain, built a stunning home and established a cattle farm.  From birth, Rockefeller had been instilled with a deep spirit of giving and ascribed to the ideal of “to those whom much is given, much is expected.” In 1966, he became the first Republican governor of Arkansas since Reconstruction, advocating for the regular person. His legacy brought about great change to wages, prisons and integration.

Governor Rockefeller said, “Every citizen has the duty to be informed, to be thoughtfully concerned and to participate in the search for solutions.” Amen to that. Couldn’t our society use a big dose of his philosophy right about now? 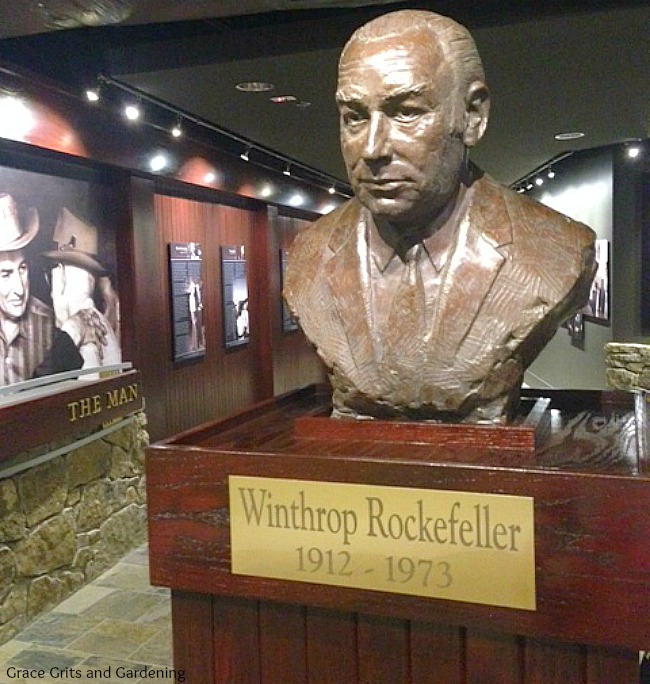 Winthrop Rockefeller Institute (WRI), located on Petit Jean Mountain, continues to honor Governor Rockefeller’s legacy by providing a facility dedicated to studying and solving today’s problems concentrating on agriculture, economic development, health and others issues. You will be hearing much more from me about WRI over the next six months as I work with the institute to bring awareness to the incredible work being accomplished there.

But for now just know…on a quiet, inspirational mountaintop, life-changing work is being done.

While walking the gorgeous grounds, I felt a sense of something larger, an urge to get out of my comfort zone and be part of the solution. There is astounding history surrounding Petit Jean and WRI—reminders of how far we’ve come as a state and nation and world. And yes, there is work yet to be done. Luca Stricagnoli – The Last of the Mohicans, acoustic guitar