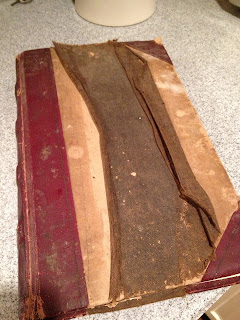 I was certain this tome came straight off the shelves of Flourish and Blotts from the shadowy bowels of Diagon Alley. As I turned the brittle pages, I expected to discover instructions for spells and magic tricks. I hoped to conjure up a house elf or stumble upon a potion for thinner thighs.
Instead I discovered a time capsule from the early 1930s.

My friend Marcia found this old ledger book in Harry’s closet. Harry (her dad) lives only a few houses down from us. She shared it with me, aware of my affinity with old things.

Harry bought his home in the early 1970s, and Marcia suspected this book belonged to the prior owner who perhaps purchased it at an estate sale.
I spent hours lost inside these musty pages reading magazine clippings and newspaper stories. The owner included favorite recipes—mostly desserts concocted with jello—some with ingredients unfamiliar to me. There were photos of hairstyles and clothing, pictures of movie stars and cleaning tips for the merry homemaker—using vinegar, not magic.

Also included, an accounts receivable ledger for  milk delivery with names, addresses, pints and payment. In 1933, Dallas had forty-eight dairies. A dairy diary? 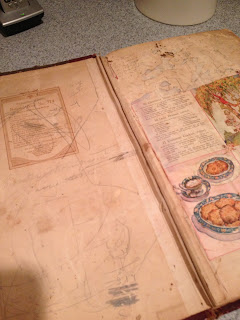 Once upon a time I had a scrapbook. I filled it with pictures and ticket stubs and junior high mementoes. (My scrapbook still lives in the Batcave…) Now I ‘pin’ photographs to virtual boards on Pinterest. Seems silly when I compare my “boards” to this book.
The book is dusty and moldy and a rodent has gnawed on the back pages. It’s my kind of book. It definitely put a spell on me.

“Imperio!”
Moody jerked his wand, and the spider rose onto two of its hind legs and went into what was unmistakably a tap dance.
Everyone was laughing — everyone except Moody.
“Think it’s funny, do you?” he growled. “You’d like it, would you, if I did it to you?”
The laughter died away almost instantly.”
― J.K. Rowling, Harry Potter and the Goblet of Fire