There is nothing like a fake bejeweled crown to bring out the claws and money clips. The Halloween Carnival in Keiser, Arkansas was THE fall event of the school year. The anticipated crowning of the Halloween King and Queen rooted the dirty farmers out of the fields during cotton harvest, the most holiest of seasons. Devious PTA wannabe queen-mothers administered full blown campaigns for their prospective royal children.Mississippi County drama at its finest.

Each class had nominees selected by classmates, but only one couple could win. I know this may be  rather shocking in today’s every-single-kid-gets-a-trophy-no-kid-gets-left-behind world. But that’s how things worked back then. The winner was selected based on funds raised for the PTA. Pure greed. Cut throat, not popular vote.One winner, a bunch of losers and no pizza party afterward. Greatness.
In second grade, Craig Barnett and I were nominated as Halloween King and Queen. Our families were friends, our dads farmed side by side, often even vacationing together. So I knew Craig pretty well and was fairly certain he had cooties. He likely felt the same about me.

To raise money for our class, we sold chocolate chip cookies and caramel apples after school and peddled homemade cupcakes to the folks who attended the live auction near our home at Cottonwood Corner. This became our full time job for weeks and weeks. Halloween child slavery. One of our biggest fundraisers was a rummage sale in downtown Keiser, hosted by our crazed mothers. Ms. Barnett, the quintessential schemer, could always pull a rabbit from her hat. Or from Clide’s hat (Craig’s dad). She lured in hordes of shoppers by hanging her mink stole and Clide’s expensive mohair jacket front and center. These luxury items were well overpriced so no one would actually buy them, but displayed perfectly to attract the nosy townsfolk. This was the talk of our little town, and Clide Barnett was none too happy. Especially since he was seen wearing the camel coat at the country club the weekend before. My second grade class raised an impressive amount of money by 1969 standards. Craig and I were crowned Halloween King and Queen of Keiser Elementary School. Draped with a velvet robe and an armful of flowers, I still remember how those giant white mums smelled. The crown, constructed of white cardboard, silver glitter and Elmer’s glue, was the envy of all.I now realize after the money was tallied, the final selection was made based on whose parents and grandparents threw the most extra money in the PTA pot at the last minute. We both came from families of natural born gamblers, so we were auctioned off like prized cattle. A farmer frenzy.Forty + years later, Craig and I are still bonded by that coronation. 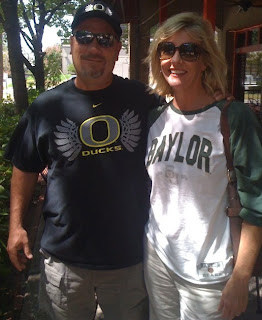