For about 5 minutes this morning, I wasn’t sure what my next blog post would be. Dreaded Writer’s Block…? What if I never had another inspired thought?

Still half asleep, I contemplated this terrible notion while plodding downstairs to let the dogs out. But ideas reveal themselves. There in my kitchen, lit only by the glow of breaking dawn, swarmed my next story. Delivered straight from Mystery Science Theater.
It was too early for a Miller Lite. 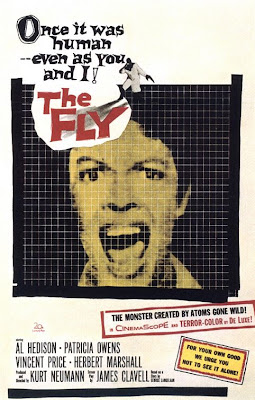 While I slept my home had become freakishly overtaken by HUGE flies.  Flies the size of bumble bees. They congregated in my kitchen window and crawled underneath the partially lowered window shade, their silhouettes exaggerated like large hairy spiders. It was waaaaaay too early for such a bizarre scene.
I know what you are thinking. And NO, my house is clean. I’m a bit of a clean freak. The opposite of a hoarder. There was nothing immediately obvious to attract these alien flies. No dirty dishes, no smelly trash, no decaying bodies.

Horror is often unexplained.
I swatted twenty-two flies in the kitchen before downing my first cup of not-strong-enough black coffee. Nine more latched on to the back door glass. What brought this about??

Halloween is a huge deal in Munger Place – the entire neighborhood goes overboard with decorations and parties and candy, setting aside grocery money for the occasion. Had the flies attacked two months from now, I would have embraced these otherworldly and free  decorations… But not mid-August.

I eliminated as many as I could and went to yoga class to namaste it away. Just breathe….
Upon my return, the monsters had multiplied like a sick virus, covering every downstairs window. Kitchen, Living Room, Dining Room, Stair Landing. My life had evolved into a 1960’s sci-fi movie, a cross between The Birds and The Fly.

For an hour I swatted the windows, splattering these huge flies, leaving blurry bacteria smears on the glass and dead carcasses on the floor. They were oddly slow moving, I killed two and three at a time. After washing every window with a vinegar cleaner and vacuuming up the casualties, I was panicked to discover the first window I eradicated was completely possessed again. 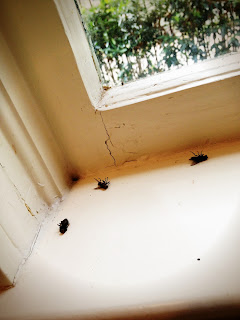 Meanwhile, this entire horror episode did not set well with sweet, sensitive Annabelle. She was traumatized and trembling, disturbed by the noisy fly swatter and my near hysteria. She went outside and only reluctantly came back. To pack her bag. I think she’s moving. 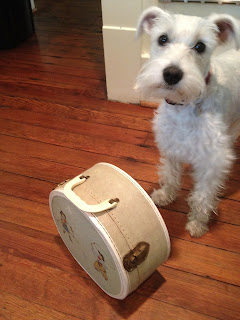