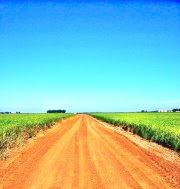 At home in Arkansas, I walked around the rice field each morning. Now that the field has been leveled and irrigated, we have our own private walking trail all the way to the drainage ditch at the South end. There were so many things to see in the early morning. Every day something new revealed itself.
Life is abundant. In addition to the rice and corn and wildflowers and vine covered trees, there were FrogsBeaversDucksDragonfliesButterfliesSnakes….
Each morning I walked and sweated and explored, digging up rocks and shotgun shells and pieces of old rusty farm equipment. Daddy’s equipment?
Something shiny caught my eye. A small silver tip nearly hidden in the dirt. It was an aluminum baseball bat buried at the far back corner of the field near the beaver dam. An odd place to find a baseball bat. Field of Dreams?
My favorite part of the walk was the far Southeast corner which is shady and breezy in the morning. Almost cool. I spent extra time there studying the water and the ditch bank which concealed the occasional pearly white shell formed thousands of years ago when the Mississippi River covered the entire delta region. 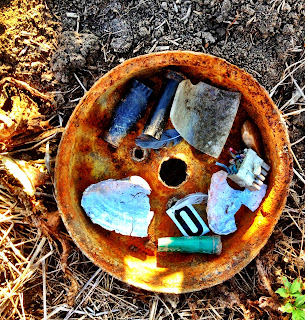 Over the past week I slowly gathered all these little found objects and piled them in an old rusty hubcap I uncovered in the field. I placed the hubcap filled with treasures near the edge of the bank as an offering to the rain gods. I hope it works…

talya
Musical Pairings:
Circle of Life, Music by Elton John
“With us, when you speak of “the river,” though there be many, you mean always the same one, the great river, the shifting, unappeasable god of the country, feared and loved, the Mississippi.“
~ William Alexander Percy