When my Daddy went through his mid-life crisis, he bought a yellow corvette. To justify this purchase, he gave her to me. At 14-and-a-half, I was too young to drive, even in Arkansas. My driving lessons had been limited to dirt farm roads surrounded by cotton fields with Momma slamming her foot on the passenger side imaginary brake. But even so, he let me drive the corvette down Highway 140 to Cottonwood Corner to buy his packs of unfiltered Camels. Something wrong with this picture? Underage driving + cigarette buying? Suh-weeet. 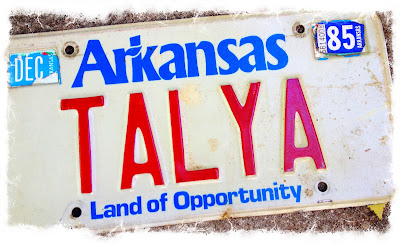 She was low to the ground and fun to drive. And thinking back, maybe there was a method to his mid-life madness. The inside was cramped like a clown car, leaving very little room for hauling loads of friends around. And she was a police magnet so speeding was not often possible. There was just no sneaking around in that Stingray. She lit up like a beacon, a tracking device before GPS. Momma could probably look out the back bedroom window and see my car leaving the high school parking lot at exactly 3:05 p.m. eight miles away on I-55. The land spread out flat and far and wide, much like West Texas without the tumbleweeds and dust storms. You could almost see the curvature of the earth, making the bright yellow corvette easily visible from the next county. We glowed in the dark.
One night at the supper table, Daddy confessed he spent the entire afternoon, when he should have been farming, following a bright yellow corvette all over the county, back around Evadale, over the levee, certain I had skipped school. He seemed oddly excited about catching me red-handed ditching school, obviously up to no good, a chip off the old block. When he finally caught up with the speeding car, the joke was on him. It wasn’t me. It was some confused man who likely would have called 9-1-1 had cell phones been around then. And Daddy so deserved it! He just expected for me to screw up, anticipating his overdue payback for the trauma he must have caused his own parents. I was safe and sound at Rivercrest with my car in the parking lot where she belonged.  We NEVER skipped a day of school. Not high school anyway. School was the most exciting thing we had to do, so what would be the point of that?
Then Daddy bought that 2nd yellow corvette for my sister.  Probably so he could watch both of us from afar. Now we had 2 highlighter yellow corvettes, nearly identical twins, and we drove both of them to Baylor University during our one overlapping semester. Two groovy yellow corvettes at Baylor with Arkansas plates was quite the conversation starter, and Baylor was one of few schools that truly appreciated the shocking color. Really, where else could we go? Oregon maybe? That year driving home for Christmas break, following each other, a cop pulled us both over simultaneously near Texarkana, just to chat. He wanted to know the story of our two twinkie corvettes. 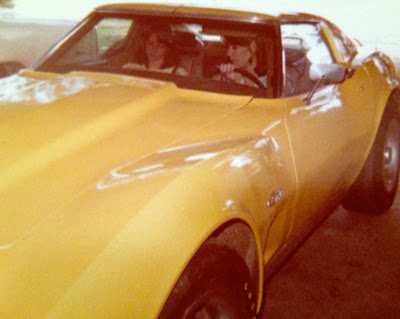 This was the only bright yellow thing I ever wore. Momma taught me from a very early age that yellow was just not my color. Even so, I had many adventures in that car including an entire day spent at the Dairy Queen in Italy, Texas – home of Willie Nelson. That’s very appropriately where she decided to give out. Daddy eventually sold her to a man in Dallas in the mid-80s. Small world. I still look for her around the city. She’s probably looking for me too.
talya
Musical Pairings:
The Beatles, “Drive My Car”
George Jones, “The One I Loved Back Then (The Corvette Song)”