Since moving to Fayetteville, I’ve been working to attract butterflies to my garden. I’m happy to report, my game plan is working. I have lots of little white cabbage butterflies, and earlier in the spring I noticed a giant swallowtail caterpillar. The swallowtail recently made her appearance. Here’s another beauty. Butterflies are fast, and my camera is not. I saw our first monarch, too! END_OF_DOCUMENT_TOKEN_TO_BE_REPLACED 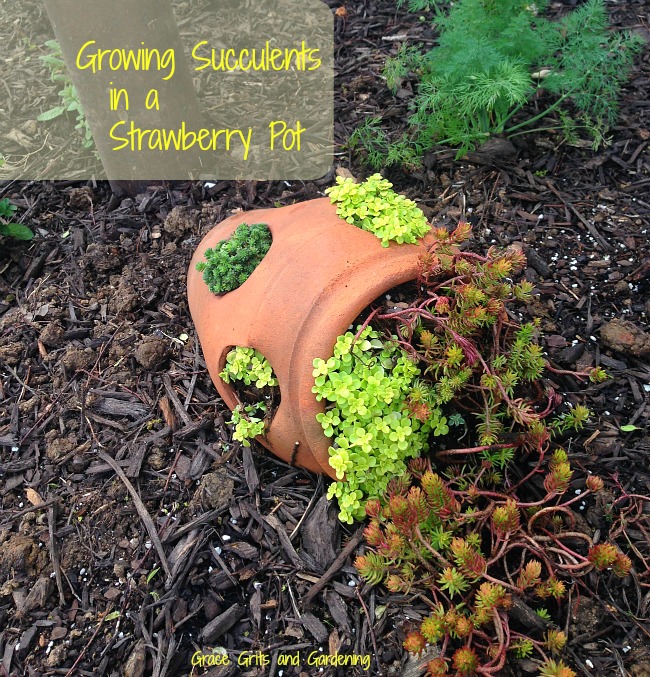 We’ve had a recent string of gorgeous days which has provided lots of gardening time. And once I get started…well, it’s an addiction. Check out this strawberry pot I found at the back of our property near the wood shed. I’m all about found objects. 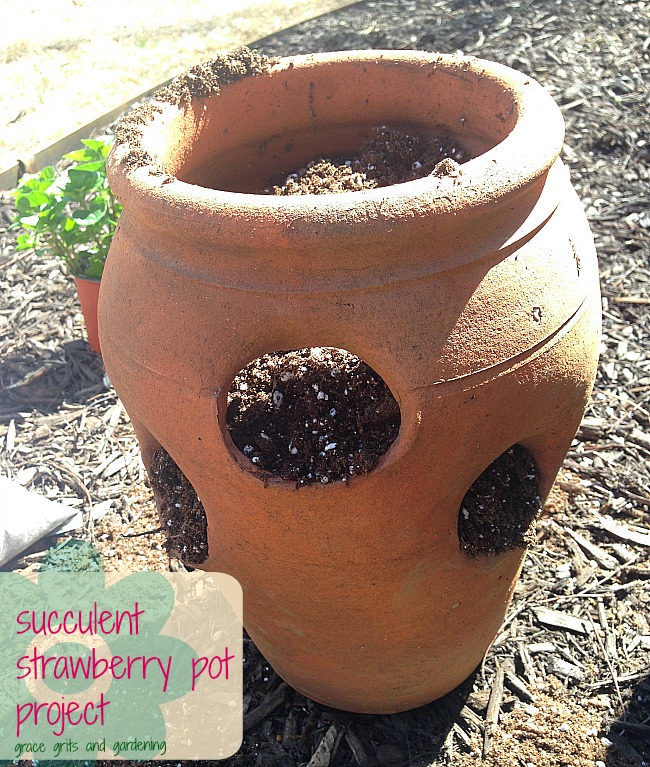 If you don’t already have a strawberry pot, I bet someone you know has one sitting around collecting water. I tend to believe that strawberry pots are one of those “good ideas at the time” sort of things. Why else would I find one in the woodshed? If you can’t score a free one, pick one up at your local garden or home improvement center. There are a variety of sizes and styles available on-line, too, from basic terracotta to hip and modern like this one at Crate and Barrel.

I decided to plant succulents in my strawberry pot. Succulents are easy to grow and come in lots of varieties and shades. Plus, many are perennial. I love the bright green color of this Japanese Stonecrop sedum as well as any blooming flower. 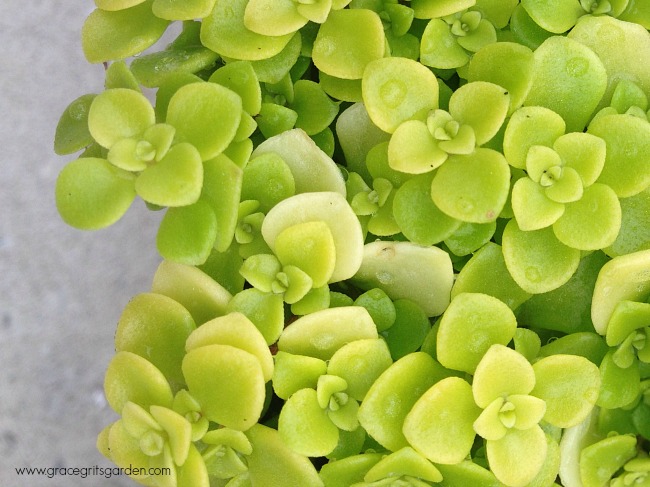 Our schnauzers helped. This would be a great project for kids, too:) 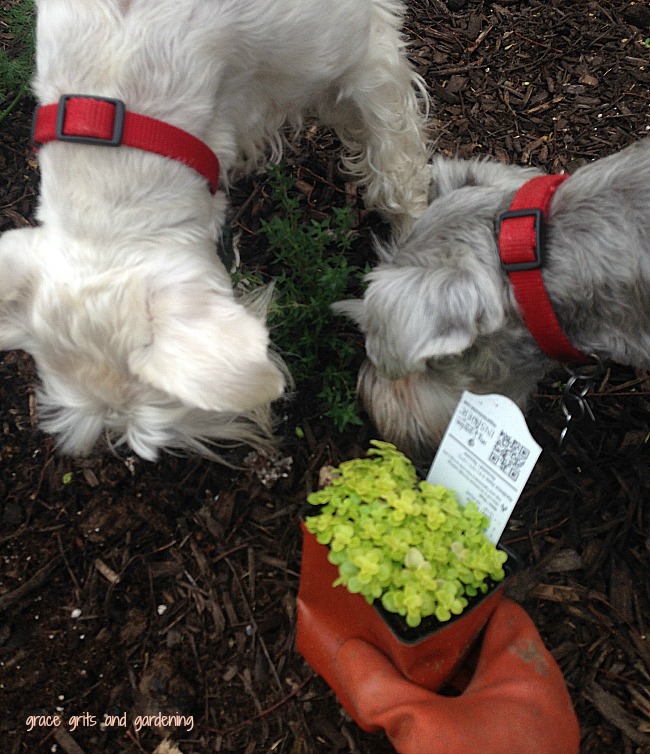 Annabelle removed all the tags while Lucy was in charge of sniffing and hiding the plastic containers around the yard like Easter eggs. 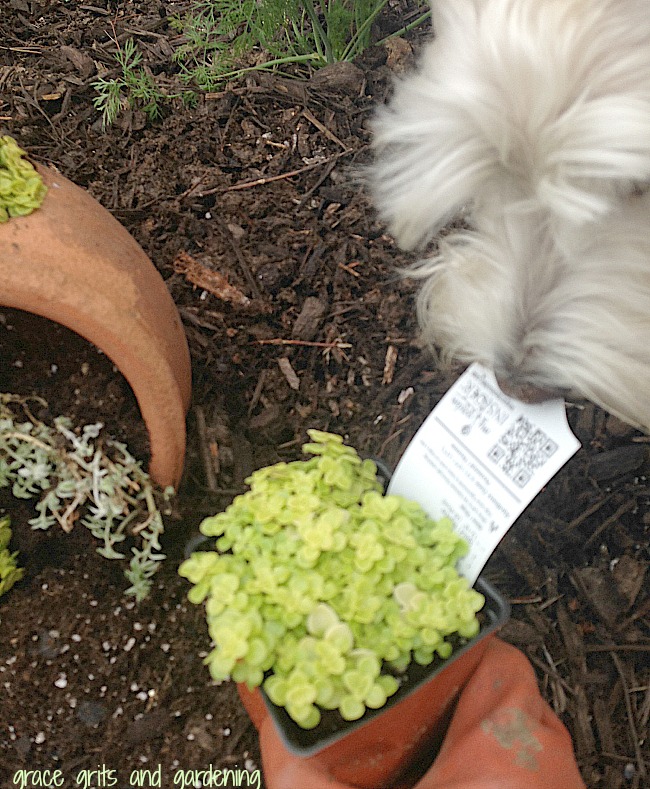 For a different look, I decided to place my strawberry pot on its side. This meant less holes to fill. I learned the hard way to partially bury the pot before beginning to plant. My pot rolled to the edge of the bed. Runaway pot. There’s a joke in there somewhere. 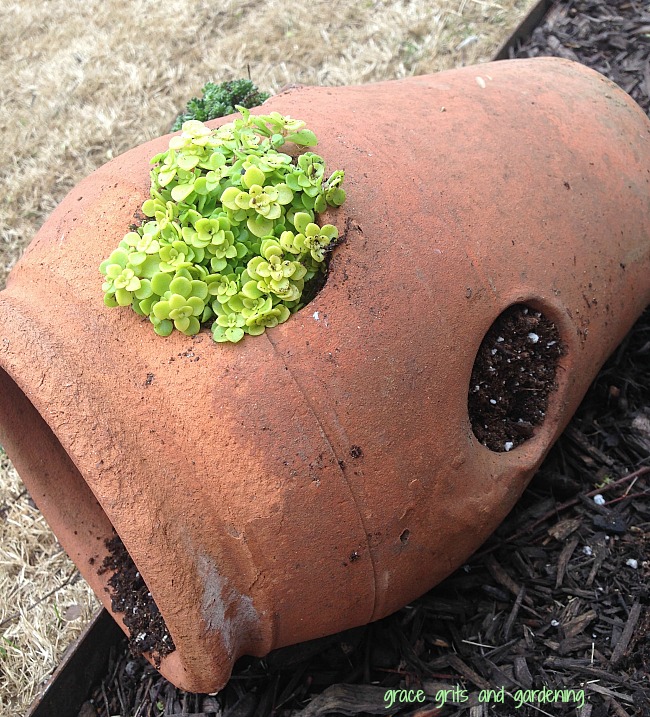 The best way to plant a strawberry pot is to add potting soil up to the first hole. Carefully thread the first plant into the hole (from the outside) and add more soil inside until the plant is secure. Add the next plant and repeat the process. Continue planting in tiers until each (visible) hole is filled. I planted a larger, trailing succulent on top, which turned out to be the side. 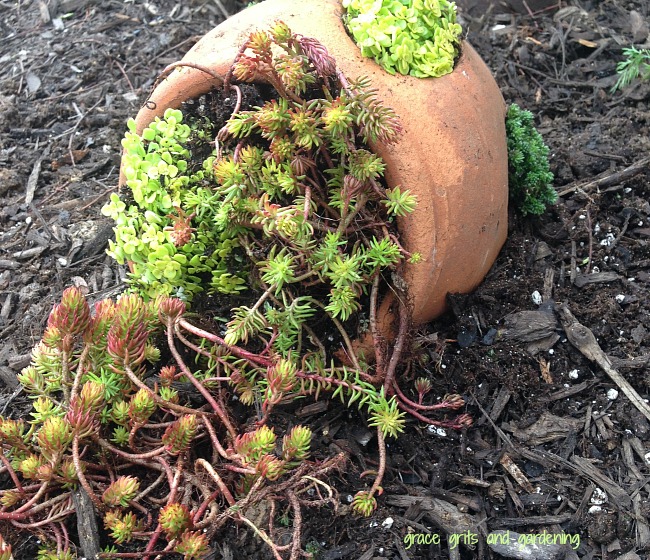 I love the way this sideways buried container has integrated immediately into our (barely planted) herb garden. Eventually, when the bed matures, the strawberry pot will look even more like a natural part of the landscape. Plus, the dogs can’t knock it over, so there’s that.

Gardening, writing and making enchiladas will keep a girl busy. My mother (aka The Bat) thought I had either croaked, lost my phone, or dropped it in the toilet because she had texted me several times over two days, and I hadn’t responded. I hadn’t posted on Facebook or blogged either.

First of all, I never received the texts because of a mysterious change in my iPhone settings. How does that happen? Anyway, after a bit of research, I fixed it without a call to AT&T (which would have severely cut into gardening, writing and making enchilada time, for sure). Yay me.

As far as being absent on social media, I’ve been on a self-imposed schedule that involves a) working on my book in the mornings, and b) gardening in the afternoons. And yes, I did make enchiladas the other day, but more on that later. So here’s an update. The book? I think it’s going well, but it’s taking longer than I expected. That’s mostly okay by me because when I’m done, well there’s the whole finding-a-publisher-thing which is way harder than breathing life into dead pansies.

And the gardening? You already know it’s one of my most favorite things to do in this life.

Here are a few of the plants John and I bought at Westwood Gardens, my go-to local (Fayetteville) garden center. A trunk full of plants leads to an afternoon well spent. One of the things I did yesterday was attempt to spruce up our front porch pots. After the snow and ice, last fall’s pansies were soggy and shriveled and looking rather pathetic, BUT since the pansy growing season in Fayetteville is soooo much longer than Dallas, I decided to revive them instead of throw them away. I dug them up, trimmed the dead leaves, added more soil, and replanted them with snapdragons and asparagus fern. The pots look much happier now, and I believe the pansies will make a recovery.

Believing is an essential part of gardening. Here’s another before and after shot showing my pansies going from pitiful to perky. Check out this cute little succulent. This one is named “Pig Ear”. Perfect for Razorback land, don’t you think? I put him in one of our most unique pots, a container we purchased at Redenta’s in Dallas. (It was handmade by an Arizona artisan whose name I don’t know, or I’ll tell you.)

My sister-in-law gave me lots of irises, day lilies and onion sets from her yard! “Dig up whatever you want,” she said. Now that’s a gardeners dream, right? Receiving plants from someone else makes the world even more special, and some of these plants originally came from my mother-in-law’s garden which makes me happyhappyhappyyyyy. I planted a row of them along our rock wall. This is a hot spot, so they should flourish. Others I planted around this boulder (along with phlox).

So where does making enchiladas come into this story? I made a big platter of chicken enchiladas last weekend using an old favorite recipe from my Baylor Cookbook (recipe tweaked a bit and coming later, maybe). We ate supper outside around the fire pit while enjoying the beginning of spring. This is an Arkansas meal. Chicken enchiladas made with Tyson chicken + Riceland rice.

Travis Tritt – It’s a Great Day to be Alive